Ah, the delicious world of hop puns. I know lots of folks hate puns, but I always get a kick out of them, even though they’re dreadfully overused, especially with respect to IPAs and hop puns. Smooth Hoperator, Hopacalypse Now, Hoptical Illusion, Black Hop Down (for an American Black Ale), Hoptimus Prime, Modus Hoperandi, Tricerahops, Hoptober, Hoppy Ending, Hopzilla, Secret Hoperative, Hopular Mechanics, Hopencrantz and Gilderhops are Hops, by Tom Hoppard and ok, fine, some of those are made up by people who hate hop puns, but most of them are actual beers. Ultimately, the only thing that really matters is how the beer tastes, so let’s get to it, shall we: 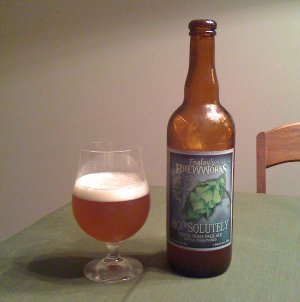 Fegley’s Brew Works Hop’solutely – Billing itself a “triple” IPA, this 11.5% ABV monster isn’t exactly sporting my favorite hop pun, but again, it’s what’s in the bottle that counts, not what’s on the label. Local beer critic Joe Sixpack actually named this his 2010 beer of the year, saying “Is Hop’solutely as good as Pliny the Younger? In a word, yes.” Pliny the Younger is, of course, the other “triple” IPA – the exceedingly rare big brother of Russian River’s Pliny the Elder. The general consensus is that both of the Pliny beers are among the best in the world, but there are always contrarians who will argue otherwise. And in the case of the Younger, a beer I’ve never had, I have to wonder if its rarity is part of the reason it gets ranked so highly. Well, my bottle of Hop’solutely was actually sitting on my shelf longer than it probably should have. I don’t know if there’s any substance to the notion that a caged and corked IPA degrades faster than a capped bottle, but if so, this one probably aged more than it should have. It almost certainly lost some of its hoppy character. But on the other hand, at 11.5%, it should be able to stand up to some longer-term aging. Well, regardless, here was my initial reaction:

Pours a dark gold color with a finger of white head that leaves lots of lacing as I drink. Smells nice and hoppy – pine, citrus, caramel and booze are prominent. There’s even some earthy floral notes in the aroma as well. As it warms, the hoppiness fades a bit, but it still smells great. The taste is very sweet, nice flavor from the caramel malts, some citrusy notes, and just a little bitterness. Oh, and lots of booze in the finish, lasting through aftertaste. As it warms, that booze takes on an even more prominent position… A really nice warming effect coming from the alcohol. Mouthfeel is very heavy, almost chewy, but it remains smooth. Just a bit of stickiness in the finish. This is powerful stuff. Not quite a sipping beer, but not really something you want to gulp down quickly either. Overall, it’s quite a good beer. I would really like to try this again when it’s fresher, as the bottle I had was sitting around for a while. I’ll give it a B+ for now, but I suspect it could be higher depending on my mood…

Someday, perhaps, I’ll do a double feature of Pliny the Younger and Hop’solutely, declare a winner, then pass out because I’ll be totally shitfaced. Speaking of double features, I haven’t done one in quite a while. I’m not sure why this is, but I may have to rectify this grievous oversight this weekend.