I recently lamented my lack of double feature posts, a fault more of circumstance than anything else. I’ve been drinking more of a variety (which does not always lend itself to the comparative nature of double features), and some styles just don’t lend themselves to this type of post. One style that’s always been a boon to double features is the IPA. It’s a style of tremendous variety, yet you can often come away from drinking one particular example feeling that it tasted kinda the same as any other IPA. So pitting two examples of the style against one another and comparing the differences has always been illuminating. This double feature was a bit odd, for a few reasons. By total coincidence, they were both 7.2% ABV, lending a nice sense of stability to the proceedings. But then, one of the beers tasted nothing like an IPA, despite being labeled as such.

To match with my beers, I undertook a filmic double feature of two Errol Morris documentaries. Gates of Heaven was Morris’s first film, and it’s one of those documentaries that proves that you can make almost any subject interesting. It follows the ins-and-outs of pet cemeteries, including the folks that run them and the people who have opted to bury their pets there. It’s not quite riveting, and there is a sorta low-budget, bare-bones vibe to the production, but Morris is able to glean a lot of interesting stuff from an obscure subject. Morris’ latest film is Tabloid, a bizarre tale of a former beauty queen who is charged with kidnapping a Mormon missionary. It’s an amazing story, pure tabloid gold, but told in a way that made me think a lot about the nature of media and how stories can unfold in the news. I won’t ruin it, but there are many revelations and the old British tabloid reporters are an absolute riot (one of them particularly loves the phrase “spread eagle”, even verbing it at one point). Certainly one of the best films of 2011 (so far) and highly recommended. Now, onto the beers: 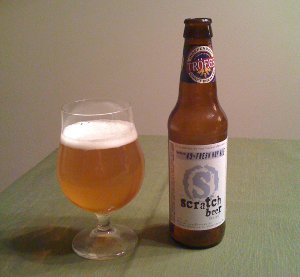 Tröegs Scratch Beer 49 (Fresh Hop IPA) – This is from Tröegs’s experimental series of small batches where they are able to play with strange ingredients or non-traditional brewing techniques. In this particular case, we’ve got a Fresh Hop IPA. Also known as a Wet Hop beer, this is basically a style that utilizes hops that were picked within 24 hours of brewing the beer. Most hops are dried, concentrating and preserving the various flavors and aromas. They’re often processed even further into pellets or plugs, which generally helps preserve their potency. But a lot of breweries will ask their local hop providers for some fresh hops so that they can brew something with them, and thus we get fresh hop beers. They’re also called wet hop beers because their water content is 80-90% of their total weight (these will go bad if you don’t dry them out or use them right away). I’ve actually had a few fresh hop beers this year, and there is something different about them, though I’m not entirely sure I could pick them out of a lineup.

This one pours a clear golden color with a finger of white head. Smells fantastic. Very citrusy sweet, with a twang of something else in there. Perhaps an earthy herbal or medicinal aroma, but in a good way, and it becomes more prominent as the beer warms up. Whatever it is, it comes out in full force in the taste. Much less citrus in the taste, which heavily favors an earthy or maybe grassy bitterness, especially in the finish and aftertaste. Mouthfeel is somewhere around light or medium body. Just enough body that it isn’t quite quenching, but not so much as to be a heavy sipper either. Overall, a decent beer. Nothing I’d go crazy for, but it is very different from your typical IPA, which is certainly a plus. B

A solid beer, but like a lot of offerings from Tröegs, it didn’t blow me away. I thus turned to my local, hometown brewers’ latest creation: 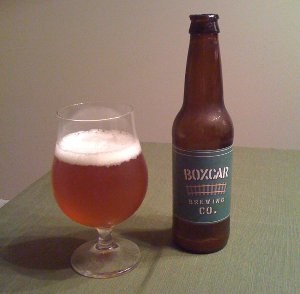 Boxcar Brewing India Pale Ale – Pours a darkish golden orange color with a finger or so of bubbly white head. Aroma is musty and just a bit spicy (you can really tell they used a Belgian yeast with this), with not very much of an earthy hop aroma and maybe just a hint of citrus (but you have to look for it). Taste is very sweet and spicy, with a little fruitiness and a nice dry finish. Again, very little hop character or bitterness here, at least, nothing like an IPA. Mouthfeel is quite nice, very well carbonated, a little of that harsh Belgian feel (which I always enjoy). Overall, it’s a very nice beer, but it’s not really an IPA, which makes it hard to rate. Ultimately, I really enjoyed it, so I’ll give it a B, but it should probably be marketed as more of a Belgian Pale Ale (or even a Belgian Strong Pale)…

The Boxcar beer kinda threw me for a loop. I feel like the lone review on Beer Advocate is pretty unfair, as it’s a D+. When you read the review, it seems he’s docking points because it’s not really an IPA. It’s a fair criticism, but then the rating says under it “Avoid”, which is pretty unfair, as it’s a pretty good beer. I agree that it’s not really an IPA, but I don’t really know how that should play into its rating. It seems more like a criticism of the branding or marketing of the beer than the beer itself. But on the other hand, it’s branded/marketed wrong! Weird. I suppose I should also disclose that this is an uber-local brewery (right down the street from me, basically in the dude’s garage), and I’m a total homer, so I’m inclined to cut them some slack. But I suppose if you’re really looking forward to an IPA and you open this, you’d be in for a big surprise. What say you?