We don’t get a lot of The Bruery‘s beers around these parts, but there are some places that stock them and whenever I see a new variety, I snap it up as quick as I can. I have to admit, I’m not even really that familiar with their catalog – I just know that if I see a bottle from The Bruery, I should buy it. Sometimes an expensive proposition, but usually worth every penny. Even when I’m not completely blown away by one of their beers*, I find myself happy to have tried it anyway. Most recently: 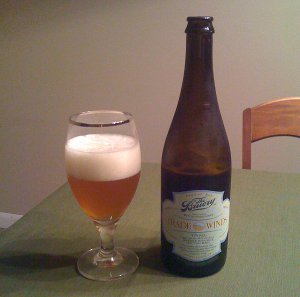 The Bruery Trade Winds Tripel – In an attempt to differentiate this beer from the throngs of other Belgian style tripels, The Bruery gave this one an Asian twist. Instead of using Belgian Candi sugar (as is traditional for the style), they used rice**, then spiced with Thai Basil. Pours a slightly hazy golden color with lots of fluffy, tightly beaded head. The nose is filled with fruitiness as well as a spicy and musty Belgian yeast character. There’s also an almost, but not quite funky aroma going on here too. The taste starts spicy with some sweetness hitting in the middle, finishing crisp and extremely dry. That finish is actually quite strange; it’s almost like I can feel the liquid evaporating in my mouth, leaving it very dry. The mouthfeel is actually pretty tame for the style. It starts out as expected, but gives way to a gentler, more subtle mouthfeel. This lighter-than-expected body is no doubt due to the use of rice in the recipe. Overall, it’s an interesting take on a classic style***. I don’t think it really rivals it’s competition, and it’s not blowing me away as some of The Bruery’s other brews do, but it is really quite good. B+

This marks the sixth Bruery beer I’ve tried, of which three have blown me away, and three have “merely” been great. In a recent beer run, I picked up a couple bottles of Cuir, their third Anniversary ale that is composed partially of a barrel aged version of their second Anniversary ale (there is actually a really interesting reasoning behind this method, which I’ll cover when I review Cuir). Actually, their second anniversary ale, called Coton, was the first Bruery beer I’d ever had, and it knocked my socks off, so I’m expecting a lot out of Cuir. At 14.5% ABV, I’ll have to find a good time for that (or perhaps share it with some folks), but I’m very much looking forward to trying one (and cellaring the other, along with an old bottle of Coton). I’m also very much looking forward to The Bruery’s next step in the 12 Days of Christmas series…

* And in such cases, their beer is still among the best out there.

** Rice is typically an adjunct used by the big macro breweries to lessen costs. Sugars derived from rice are very simple and thus completely consumed by yeast, increasing alcohol but not really impacting the taste. This proves useful for light, flavorless beers, I guess, but in the case of The Bruery, they’re adding it to an 8.1% ABV beer of a style that is usually overflowing with taste. In other words, The Bruery is using rice to enhance and complement the beer, rather than to make the beer cheaper and more flavorless.

*** Indeed, it almost reminds me more of a dry saison than a tripel. Sorta like a summer tripel – and this being a summer release that features the words “Summer Fun” on the label, I guess that makes sense.