Many people seem to recommend this beer to other folks who can’t get Pliny the Elder in their area. This is a somewhat contentious claim, and most will admit that Hop Stoopid isn’t quite the equal of the vaunted Pliny, but they do share a certain character (of course, there are always contrarians that will say this is better than Pliny*, but I digress). That being said, it’s definitely much easier to find Hop Stoopid (and it’s usually cheaper too). 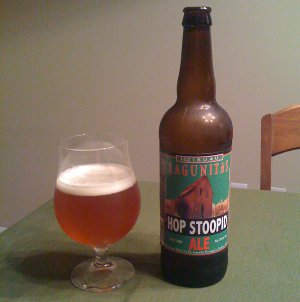 Lagunitas Hop Stoopid – The label prominently displays the tagline “102 I.B.U. 4 U” which means we’re in for a pretty bitter beer. Luckily, Lagunitas knows what they’re doing and they’ve balanced that bitterness with an appropriate amount of sweetness. Pours a dark orange color with a finger or so of head that leaves lacing as I drink. The smell is filled with grapefruit, pine and resin aromas. Actually, so is the taste. Sweet, filled with intense citrus and pine flavor. There’s a nice, bracing bitterness appearing midway through the taste and continuing through the finish. It’s got a medium body, but it’s extremely drinkable for something packing this much flavor. Alcohol is hidden pretty well here too. Overally, a really fantastic double IPA. A-

Apparently I need to make myself more familiar with Lagunitas. For whatever reason, I’ve never been that attracted to their beers (perhaps it’s their labels, which never seem to catch my eye), but they seem to be a big deal and some folks seem to really like them, so yeah, I’ll try and pick up something else from them on my next trip to the bottle store (which may be a while, as I’m pretty well stocked right now). This is certainly a good first impression.

* Update! Jay from Beer Samizdat comments on twitter: “Better than Pliney, I say – no contest.” I guess he’s one of them contrarians I was talking about. See also: his original review of Pliny the Elder (which he calls “A very good overrated beer”) and his original Hop Stoopid review.