So I haven’t actually reviewed my homebrewed tripel yet, but it’s definitely good enough that I might want to give it a name. Unfortunately, I kinda suck at that. I always end up with informative, but ultimately bland names. Witness the name of this blog: Kaedrin Beer Blog. Boy, I really pushed the envelope on that one. This is mildly depressing. Lots of beers have fantastic names and crazy backstories and I’m going to end up with, what? “Mark’s Tripel” won’t cut it. “Tripel Play”? Yeah, no one’s come up with that before. I just don’t have a knack for it. I wish that I could come up with something like Johno’s Trogdor The Burninator “Consummate V” Belgian Strongbad Ale, but even funny referential naming escapes me when I try to think of a name for my beer.

So when I see something like Victory V-Twelve, I’m somewhat relieved. It’s such a pragmatic name. It’s the sort of thing I would name a beer. I like to picture Bill Covaleski and Ron Barchet sitting in a boardroom brainstorming names while drinking the beer, but because it’s fucking 12% ABV, they quickly get shitfaced and say “Fuck it, we’re Victory and it’s 12% alcohol, we’ll just call it V-Twelve!”, then do the Go Team Venture symbol and pop the cork on another bottle. Incidentally, this was sitting in my fridge for a while. Not only is it 12%, but it only comes in 750ml bottles, so you either need to share it with someone or you need to be in the right mood.

On Victory’s website (and the bottle itself), they say that it’s a “vintage-dated, Belgian-style specialty ale”. Alas, my bottle had no date on it (or perhaps it just got rubbed off or something). I know I bought it before the new year, so I’m guessing it’s at least half a year old, and given the high alcohol and flavors involved, I’m sure it could stand up to some long-term aging. 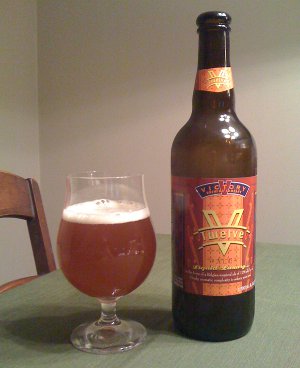 Pours a relatively clear dark amber/orange color with a minimal white head. Smell is full of dark fruits (plum?) and spices, with just a hint of Belgian yeast. Sticky dark fruit in the taste as well. Very sweet, I worried that it might get a bit cloying after a while, but that annoyance thankfully never developed. Some warming alcohol character is present as well. It’s got a full body but a smooth texture. Beer Advocate calls it a Quadrupel, but it seems more like a Barleywine than a Quad. Of course, Victory doesn’t really call it a Quad either – they call it a Belgian Specialty Ale (or an Amber Ale), which is probably more accurate.

Whatever the designation, this is quite good. Again, I was a little worried that the sweetness would get cloying, but I never actually got there, and as it warms, it evens out a bit. There’s no real bitterness at all, but its texture and alcohol keep it from getting too overwhelming. And speaking of that alcohol, it’s clearly present, but not in a bad or overly boozy way. It’s very well balanced with the rest of the brew. This is one of those beers whose quality has grown in my head as time goes on, making me want to get a few more bottles so that I have one on hand if the mood strikes. A

Victory continues to be my local hero. Even when I’m disappointed by one of their beers, I’m glad I tried it (and they’re usually still worth drinking anyway). I’m most definitely going to pick up a few more of these and age them, just to see what happens.