I love Ommegang, but even I have to pause at their presumption of “perfection” on the label of this beer. They even mention on the label that tripels are brewed “with simple ingredients and fierce attention to detail, there is little room for error – but lots of opportunity.” Indeed. Belgian tripels are among my favorite styles, and Ommegang is among my favorite breweries, so I had high expectations here. Indeed, this was a hard one to find, raising expectations further. The only place I saw it was in a holiday package that also had a couple other Ommegang beers and some nice glassware (which, unfortunately, didn’t show up particularly well in the image below). 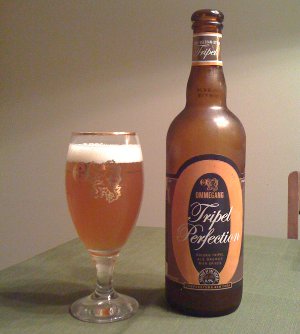 Ommegang Tripel Perfection – Pours a cloudy orange/brown color with a couple fingers of head. Smell is full of fruity and spicy belgian yeast. The taste starts off sweet (some fruity character here), hits a spicy note (coriander?) in the middle and finishes dry. That dry finish may be partially because I waited so long to open the bottle – tripels tend to get more dry the longer they age. This isn’t necessarily a bad thing, and it’s not out of place at all here. The bottle I have is marked as having been packaged on 6/29/10, so it isn’t that old, but still. In any case, the beer is extremely well balanced, which is something I’ve come to expect from Ommegang. Mouthfeel is high in carbonation and a bit harsh, but those are welcome for the style. Just a hint of stickyness and some warming alcohol notes. Very complex for a tripel. Perhaps not the best in style, but certainly in the top tier. In general, I feel that Ommegang’s seasonals and special releases aren’t as good as their regular stable of beers, but in this case, I think they really have a winner. A-

There’s an anonymous quotation on the bottle that says “One can not adequately explain perfection. One can only enjoy it.” Indeed. I don’t think the beer quite lives up to Perfection, but it’s close!