I’ve written about Trappist style beers before, mentioning their naming convention of dubbels, tripels and quadrupels. The styles are notoriously vague, but the idea is each numerical step up the ladder represents an increase in the strength of the beer. Furthermore, at many breweries, there is often what’s called a House beer or a “Single” (aka “Enkel”). In a lot of cases, this terminology has yielded to the term “Blonde”. In any case, it’s generally the lightest and least alcoholic of the styles (again, with each successive step up getting stronger). So apparently the monks at Westmalle aren’t constantly getting sloshed on their excellent tripel (9.5% ABV), instead preferring to pop open a single to enjoy with their meals. In some cases, these beers are not released to the public, earning the name Patersbier (which translates to “father’s beer”, meaning that it is reserved for use within the abbey). For instance, Westmalle’s single, called Westmalle Extra, apparently has very limited availability.

Inspired by the tradition of “singles”, Russian River brewer Vinnie Cilurzo created this beer, called Redemption. Apparently, like many of RR’s other beers, Brettanomyces was added to the initial bottling to add a wild flavor to the beer. However, it appears that the Brett additions were not included in subsequent batches, and the alcohol content seems to be shrinking as well. Initial batches were in the area of 6-6.5% ABV, but the bottle I got (batch #8) is marked as 5.15% ABV (strangely, their website says 5.0%) 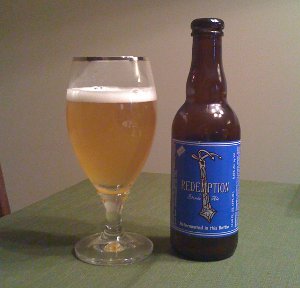 Pours a very light, hazy straw yellow color with about a finger of head. Smells strongly of fruity belgian yeast. Taste has an almost wheat beer character to it… Very sweet and crisp, with just a hint of lingering dryness in the finish. There’s maybe some citrus in there, perhaps lemon, but it’s not particularly tart, though there is a bit of a sharpness to it. This isn’t a beer that will blow you away, but it’s light and refreshing and would make a fantastic summer beer. B+

And on an ironic note, after all my blathing about singles and patersbiers, BeerAdvocate lists this as being a simple Belgian Pale Ale, which probably makes sense. Anyway, according to the bottle, this is the sister beer to Russian River’s stronger pale ale, Damnation. I just happen to have a bottle of that sitting around here somewhere, so expect a review at some point (I’ve had it a few times before, and it’s great).