Back in 2003, RealBeer.com sponsored a contest asking people to submit descriptions of their “dream beer.” A home brewer named Noel Blake from Portland won the contest and RealBeer chose Brewery Ommegang to brew the beer. It first appeared in late 2003.

A fledgling beer nerd at the time, I was perusing the shelves of my local beer distributor when I noticed the new beer. Ommegang was the brewery that really opened my eyes to what beer could be, so the appearance of a new beer in their lineup was a welcome surprise. And it was labeled as a Quadrupel, which is like, 4 times better than regular beer, right? It was quite expensive, but I plunked down the cash for a case of the beer (stupid PA laws) without even really knowing what it was. And I’m glad I did! Like the other Ommegang beers I’d tried, it was like nothing I’d ever had before.

Now here’s where things get a little weird. I revisited this beer last weekend, and in scrutinizing the bottle (because I’m a huge nerd), I noticed some things were different. First, I remember my original case of Three Philosophers said it was “Ale with Cherry Lambic” or something like that. The 2010 bottle I was looking at said it was brewed with “authentic Belgian Kriek” (which is also a Cherry ale, but that’s different from Cherry Lambic). I also seemed to remember the original ABV at 10% and the new bottle said 9.8%. I thought for a moment that I must be going crazy in my old age, but a search of the Kaedrin Media Asset Management System (i.e. my hard drive) turned up this picture from early 2004 (you can click the image for a larger version): 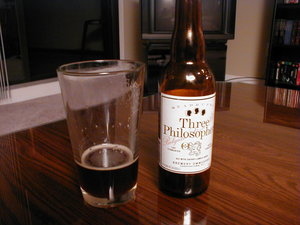 A ha! It says “Ale with Cherry Lambic Added”. So I’m not crazy*. Unfortunately, I can’t make out the ABV (which I assume is on the bottom right of the label, which is just out of sight) and my CSI-like powers of image enhancement are just not up to snuff to figure that out**.

Since I was also curious as to where the name “Three Philosophers” came from, I did the only sensible thing and sent my annoying and pedantic questions directly to Ommegang. A nice woman named Betsy answered me right away with a bunch of info about the beer, the RealBeer contest, and why it’s called “Three Philosophers” (links added by me):

The name Three Philosphers is in reference to a manuscript called Island in the Moon, by William Blake in which the protagonist has a meal and drinks with three fictional philosophers. You will notice the heads on the front of the bottle, which are our Three Philosophers. The middle is Michel Moortgat, owner of Duvel-Moortgat, our parent company based in Belgium. The left is Phil Leinhart, current brewmaster at Brewery Ommegang and the right is Randy Thiel, former brewmaster at Brewery Ommegang.

On the matter of ABV, Betsy did some investigating but could find no mention of 10% ABV. Because I’m a dork and like to believe in the infallibility of my brain’s memory, I have my doubts. Which are probably unfounded***. Of course, none of this really matters because the beer was awesome and remains awesome, no matter what kind of recipe tweaks it’s undergone. 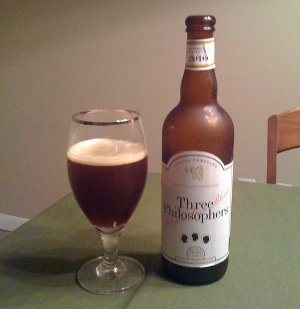 Ommegang Three Philosophers – Pours a very dark brown color with a small light colored head (some lacing apparent as I drank as well). Smells strongly of chocolate and caramel, with hints of cherry and just a bit of the typical Belgian yeast aromas. Tastes fantastic. More sweet chocolate and caramel, that hint of cherry again, and an aftertaste that’s just a bit dry. Full bodied but smoother than you’d expect. It’s not an easy drinkin’ beer, but it’s a nice sippin’ beer. The alcohol is well hidden, though if you drink quickly, you get a nice warming sensation. I feel like I’ve been saying this a lot lately, but it’s complex and truly unique. A perfect dessert-beer**** and one of my long-time favorites. A

Sometimes I worry that beers I like from before I was really into beer won’t hold up, but I’m happy to report that Ommegang’s beers have held up well. And of course, I’ve got more reviews in the pipeline, and at least one more on my shelf (making its way to the fridge in short order, I think).

* As it turns out, there are multiple images/flash presentations on Ommegang’s site that feature circa 2004 bottles of Three Philosophers that also sport the “Ale with Cherry Lambic Added” label. So maybe I’m not crazy, but I am kinda dumb.

** The pics in the previously asterisked note also indicate that the beer was 9.8% ABV, so I’ll concede that the previous conclusion about how dumb I am has even more merit.

*** Can you tell that I added these asterisks after I wrote the bulk of this post? Yeah, you can. So given the evidence in the other asterisks, I’m guessing I just made that 10% number up. At the time it was the strongest beer I’d ever even heard of, so I was probably just telling people that it was, like, 10% alcohol man…

**** Is four asterisks too many? Or should I have been doing numeric footnotes? Do you care? I didn’t think so. Anyway, when I cajoled a bunch of friends to stop by the Ommegang brewery during a trip to Cooperstown (ostensibly for a bachelor party and the Baseball Hall of Fame), the guy who gave the tour said that the rich flavors go really well with sweets (chocolate and other deserts, etc…)

***** Bonus asterisk! Before I was a true beer nerd, I had no idea what cherry lambic was. One time, I went to a bar and they were all: Oh you like Belgian beer? Duder, we just got this awesome cherry lambic beer in on tap, you should try it! and I was like Ohhh, another beer like Three Philosophers? Sign me up! And of course, the beer was absolutely nothing like what I was expecting (i.e. I had no idea what cherry lambic was), but I enjoyed it anyway. I wanna say it was really strong too, like 14% or something ridiculous, but given my recollection of ABV above, perhaps I was wrong. It was probably 3% or something.