I picked this up mostly because it had a nice label and I associate the term “blonde” with Belgian style pale ales, which I enjoy. When I looked at this a little closer, I realized that it was a Kölsch. I’m not terribly familiar with the style, but it seems to be to be a whole lot closer to “yellow fizzy beer” that exemplifies the macros than something I’d really want to try. My only recent exposure to the style was Flying Dog’s Tire Bite Ale, and it’s my least favorite offering from that brewery. This is not particularly encouraging, is it? But then, maybe setting the bar so low will lead to an unexpected surprise! 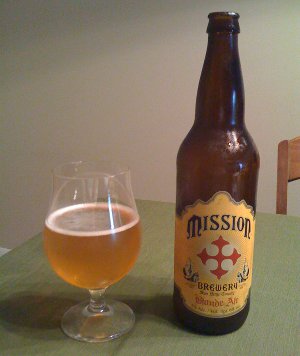 Mission Blonde Ale – Pours a slightly cloudy (but mostly clear) golden yellow color with a finger of quickly disappearing head. Some fruitiness and maybe sweet candi aromas in the nose. I got a distinct candy/bubblegum aroma feeling out of this, but I can’t quite place it. Interesting and definitely the best part of the beer. Taste is pretty straightforward and a bit sweet, with just a little bitter dryness in the finish. Very crisp mouthfeel though and a surprising amount of body. Unfortunately, it’s a fairly delicate beer, and it didn’t quite stand up to, well, the pizza I was eating at the time. Is that unfair? Maybe. It strikes me as the sort of beer that could be quite pleasant or thirst quenching after mowing the lawn or something… but it doesn’t seem to hold up to competition (whether that be from other beers or food). B-

Despite the relatively low rating, I have to say that I’m now a little more open to the style. There’s enough interesting stuff going on with this beer that I’m sure a better version exists somewhere. Not to bag too much on Mission – they seem like an interesting little brewery, and I have another of their brews on my shelf that I hope to check out soon.