Brewery Ommegang has long been one of my favorite breweries, and I do credit it with introducing me to the world of “good” beer. As such, whenever I see a new beer from Ommegang, I usually snap one up and drink it as quickly as possible. This particular beer, though, has never really been on my list of most sought after beers, mostly because it’s a self-described Belgian Style Stout. I’ve never been a big fan of stouts, but since I’ve been coming around to the idea lately, I figured this would be worth a shot. After all, I love Belgian style beers, so maybe that will compensate for whatever it is I don’t like about stouts. Unfortunately, this one turned out rather like my last experiment with Belgian style stouts (though I think both are technically labeled as Belgian Dark Ales). 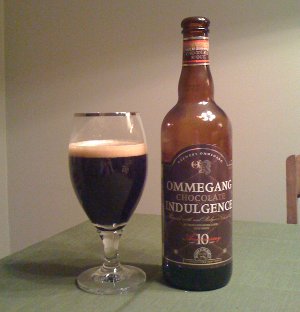 Ommegang Chocolate Indulgence – Pours a very dark brown, almost black color. Completely opaque, with a rather small head, but lots of lacing as I drink. The smell is dominated by roasty malts, though there are some other more subtle aromas coming through, including the typical Belgian yeast scents. Taste starts off very sweet with some roastiness coming through in the middle and especially in the finish, which is dry and a little bitter. Said bitterness is more reminiscent of dark chocolate than hops (unsurprising, given that this is apparently brewed with real cocoa powder), but I’m sure both are playing a role here. Good carbonation and a medium mouthfeel (I was hoping for something with a fuller body). Very well balanced beer, but pretty straightforward as well. In comparison to the other Belgian-style stout I’ve tried recently, this one is perhaps a little better balanced, but less… Belgiany. Ultimately, I’m a little disappointed. Another case where I’d rather have had a really good Imperial Stout or a really good Belgian Strong Dark, not a combination of the two. B

I wouldn’t call it bad, but this may very well be my least favorite Ommegang beer. But I doubt it will slow me down. I have already procured a bottle of their Tripel Perfection and am very much looking forward to their collaboration with La Chouffe, Gnomegang. Not to mention the fact that I seem to always return to their staple beers…