I’ve long professed my love for Yuengling Lager. It’s not a face-melting beer by any stretch of the imagination, but it’s solid and dependable and locally ubiquitous. Over the year’s I’ve tried most of their other beers – the porter, the black and tan, the premium lager, and various light varieties – but none of those really stick out. Then I see this new beer with a fancy vintage label design that I don’t recognize. Yuengling makes a Bock? And it’s a seasonal release? Wow, I had no idea.

Apparently this seasonal beer was once a staple release, but it hasn’t been brewed for nearly 40 years. To celebrate Yuengling’s 180th anniversary, they did a limited, keg-only release that was so popular that they decided to make it a regular thing. Since I was in the market for some non-face-melting beer to drink during my Lenten coke fasting, immediately picked up a sixer of this. 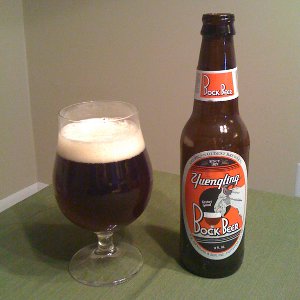 Isn’t that label awesome? It’s apparently based on artwork from the 1941 release. I love the Billy Goat, apparently a staple of Bock style labels (I’m sure I’ll cover that convention at some other time). It pours a clear, dark brown color with a reddish tint and a small, tan head. As you’d expect, it smells malty, but not particularly fruity or sweet. The taste is not especially powerful, but there’s some malty sweetness there, perhaps a tiny bit of roastiness, and it finishes a bit dry (though it’s not really bitter). It’s not dissimilar to a Scotch ale, though this isn’t quite as impressive as the Scotch ales I’ve had lately. Mouthfeel is a bit on the thin side. It’s very easy to drink and not disagreeable, but it’s not particularly special either. A nice change of pace, but nothing that will unseat the mighty Lager. C+

I suspect this is exactly what Yuengling was going for though, and I certainly wasn’t expecting anything overly special, but it would be interesting to see what Yuengling could accomplish if they put their resources behind a more unique and powerful beer. I don’t really expect that anytime soon though. Yuengling isn’t a craft brewery, after all. But they’re certainly better than other macros!