Regular readers (all 2 of you), may recognize this as the beer I mentioned a few weeks ago for my entry to the “Regular Beers” Session. Of course, that entry only touched on this specific beer… as an example of a non-regular beer. For most breweries, at least. For Allagash, it’s one of their “classic” beers. For them, this is a regular beer. But they’re one of the few American breweries that specializes in Belgian styles, and we all know that the Belgians don’t make regular beer. Except for Stella Artois. That stuff sucks. 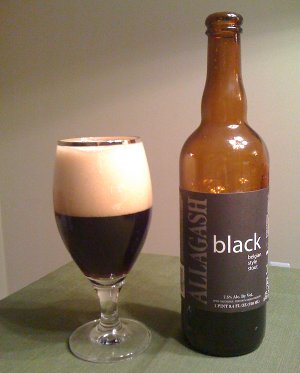 Allagash Black – I don’t know why, but when I popped the cork on this one, I took a whiff of the bottom of the cork and it smelled… light and fruity (more like a saison or tripel style). Unexpected for a beer that bills itself a “Belgian Style Stout”. Of course, Beer Advocate classifies it as a Belgian Strong Dark Ale, which makes a sort of sense. Belgian styles are notoriously vague anyway, so I don’t see why this wouldn’t qualify as that. Belgian beers don’t usually emphasize roasty flavors though, so perhaps it could be classified as a stout. In reality, it’s probably more of a hybrid. Sometimes I like this sort of thing, sometimes I end up craving one of the styles being mixed instead of enjoying what’s in front of me.

Anyways, perhaps too vigorous of a pour lead to a massive head. The beer underneath appears to be a very dark amber/brown color. The nose is all Belgian yeast, spicy and fruity. Perhaps just a hint of roastiness. Taste is rich, chocolately and roasty. A little dry bitterness lingers. Carbonation is just a hint low (and possibly the result of the aforementioned pour), but it works very well. Its smooth and quite drinkable. At 7.5% ABV, it’s no monster, but it’s big enough that I was expecting some booziness… yet none is apparent. Quite an easy drink. It’s an interesting combination of flavors, though I’m not entirely sure it ranks among the best Stouts or the best Belgian Strong Darks… and quite frankly, I would probably rather have had one or the other, rather than this combination of both. It’s kinda doing its own thing though and it is well made, but it didn’t really strike a chord with me the way some other mixtures have. I’ll give it a B, though I suspect a bigger fan of stouts would like this a lot more.

Allagash has always been a bit of a mixed bag for me. As makers of Belgian style beers, they will always interest me, but I can’t say that they brew one of my favorite beers or anything. Yet. But I’ve mostly only had their “Classic” series, which are the more normal styles. The most interesting beer of theirs I’ve had was the 2009 Fluxus, which I remember as being fantastic. I was a bit worried when I read that it was “Ale Brewed with Sweet Potatoes & Black Pepper”, but it turned out to be fantastic. Unfortunately, it was a one time batch and I can no longer find it. In any case, I’m very much looking forward to the bottle of Curieux (a Bourbon Barrel-Aged Tripel) I’ve recently procured.