As mentioned in my previous post on Washington’s Tavern Porter, Alexander Hamilton’s contribution to Yards’ series of Ales of the Revolution beers (variously referred to as Federalist Ale or Treasury Ale) is curiously missing from the brewery’s website. During a recent trip to a local beer shop, I noticed another oddity. The plot thickens: 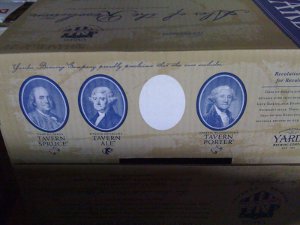 Gee, I wonder what used to be in that third slot there? I’m virtually certain the last time I saw that variety pack box, it had Hamilton there. Anyway, curiosity got the better of me, so I fired off an email to Yards and got a quick response:

The Alexander Hamilton is currently being done only for City Tavern. It’s currently Philly Pale. It’s on the shelf as an R&D beer. It’s status as a new addition is still up in the air.

Well that certainly clears things up a bit, though I’m not sure what the “It’s currently Philly Pale.” means. Is he referring to Yards’ standard Philadelphia Pale Ale? Is Federalist Ale the same beer? Or is it a slightly modified version (BA has the ABV as being slightly different between the two beers, if that matters). I guess the fact that it’s a R&D beer explains a lot of this, including the different names and classifications.

I suppose some specifics in the screenplay I wrote are technically wrong, though I’m sure you’ll understand that realism wasn’t exactly one of my goals in writing it. Heh.