If you happen to mention Royersford, PA to me, two things immediately come to mind. First is their distinctive fire horn (seriously, that’s a badass horn). Second is Sly Fox, a brew pub and micro brewery that’s been steadily expanding. They’re one of the few craft breweries with a canning line, something they started doing long before it became trendy, though they also have a bottling line for big beers like the one I had recently: 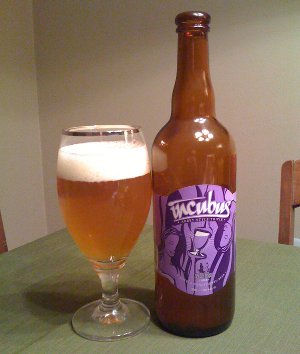 Sly Fox Incubus – Pours a hazy yellow gold color with a white, fluffy head. Smells of spicy Belgian yeast (cloves, etc…). Maybe a little fruitiness in the nose as well. Taste is pretty straightforward. Sweet and spicy like the nose, and some booziness as well. In fact, that sticky alcohol flavor lingers a bit in the aftertaste. Coming in at 10.3% ABV, it’s a bit too strong, even for a tripel. Highly carbonated with a bit of a bite, it’s nevertheless pretty easy to drink. All in all, it’s a pretty straightforward Belgian tripel style beer. It’s one of my favorite styles, so I do really enjoy this, but on the other hand, there’s nothing particularly complex about it. A solid effort. B

I’ve got a couple other Sly Fox beers in my fridge, and perhaps someday a trip out to the brew pub for some dinner and beer someday.