Does TRON: Legacy count as an animated film? There is certainly a ton of animation in the film. Even some of the supposedly “human” characters are animated (notably the pre-disappearance Flynn and CLU), albeit sometimes poorly (you can see that uncanny valley effect quite clearly on a couple of occasions). Well anyway, I went in with very low expectations that were thus met. It was entertaining and pretty to look at, and the music was awesome, which is about all I could ask of it. This iRi post gets at one of the things I really like about TRON (the way the grid seems so alien), but I have to say that the effects described in that post are probably less pronounced in the sequel (in particular, I was disappointed by the light-bikes). The other film of my double-feature (and the only one I was actually drinking during) was Despicable Me, which had a few really funny moments (and I love the minions), but which is ultimately nothing too special. As kids animation goes, it’s no Pixar, but it’s probably a step above average.

I’ve never really been a fan of Stouts and when I started this blog, one of the things I wanted to do was better familiarize myself with the style. I took a bit of a detour into Belgian Strong Darks during the holidays, so I have a bunch of Stouts that I’ve been buying that have been sitting in my fridge or on my shelf waiting. They’re certainly good winter beers, though I wouldn’t recommend drinking a stout while watching an animated kids movie. Kinda weird, actually, but that’s what I did: 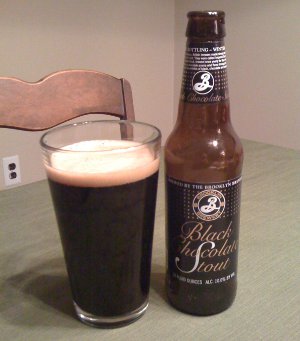 Brooklyn Black Chocolate Stout – Pours an opaque black color with a small, relatively light colored head that leaves lots of lacing as I drink. Smells a bit on the roasty side with some nice maltiness coming through, maybe even some caramel. There’s only a very light roastiness in the taste though, which is instead dominated by rich chocolaty flavors, some of that caramel, and a solid malty sweetness. There’s some bitterness there too, but it’s dry, like dark chocolate. Indeed, this is almost like drinking a good dark chocolate. It’s a full bodied brew with surprisingly good carbonation given the small head and high alcohol, which makes one heck of a smooth, drinkable beer (a bit dangerous when it comes in at 10% alcohol!) I get the feeling that lesser breweries would totally screw something like this up. All of the complex elements here are very well balanced. As I said, I’m not much of a stout drinker, but this one is probably the best I’ve ever had. I don’t think that will last, but it’s still an impressive effort from Brooklyn (and my new favorite beer from that brewery). A 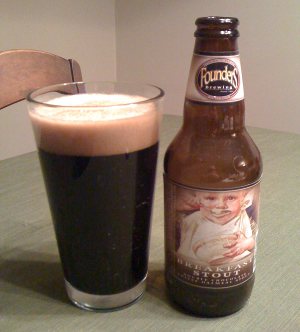 Founders Breakfast Stout – Before I get into this one, a disclaimer: I don’t drink coffee. I wouldn’t say that I hate coffee, but I don’t particularly like it either. So while this beer is currently ranked on BA as the 7th best beer on the planet, I am not likely to enjoy it quite so much. So if one of my three readers happens to be a beer nerd, be forewarned, I’m gonna rate this one relatively low. Like the Brooklyn, it pours an opaque black color, with a bigger, darker colored but still light brown head. Some lacing apparent, but not as much as the Brooklyn. Smells much more roasty with some coffee thrown in for good measure. Now, I do usually like the smell of coffee, but this beer isn’t really doing much for me on that front, which I find odd. The taste is also dominated by roasty coffee flavors. There’s some malt sweetness there too, maybe chocolate, but it’s overpowered by the coffee. There’s a complexity in the taste, but I just can’t get past the coffee. As far as mouthfeel goes, it’s got good carbonation and a nice full body. A little less smooth than the Brooklyn stout, but still quite drinkable (assuming you like coffee). Really, this just ain’t my style of beer. I’m glad I tried it and it’s certainly not a poorly crafted beer, I just don’t like coffee… If you do, you’ll probably love it. B-

So there you have it. I loved one and didn’t care for the other. I’m looking forward to some of the other stouts I have waiting in the wings though, including one from Stone and, given my taste it should not be surprising that I have some Belgian-style darks that are kinda pretending to be stouts, like Allagash Black and Ommegang Chocolate Indulgence (which says it’s a stout on the bottle, but is classified as a Belgian Dark on BA).