A little while ago, I mentioned the St. Berndardus variety pack that I got my hands on, but until now, I hadn’t actually cracked it open. I’m not an expert of beer and food pairings, but I was having some Sushi the other night and I had recently run across this Beer Sommelier, which matches meals with beer styles. When I looked up Sushi (just FYI, it’s under seafood, not fish), it recommended various kinds of wheat beers and in consulting my cellar (i.e. my fridge), I saw that the St. Bernardus variety pack indeed included a Belgian style witbier. I would not call myself a huge fan of wheat beers, but I’ve had a few good ones in my time, and I was hoping for a lot from St. Bernardus. 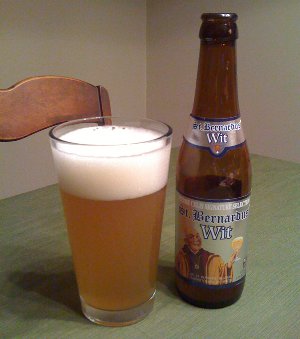 St. Bernardus Witbier – Pours a cloudy yellow color, with lots of head and lacing as I drank. Smell features wheat and a prominent Belgian yeast character, with a little citrus apparent as well. Taste is clean and crisp, a little thin compared to the monsters I’ve been drinking lately, but refreshing. Lots of wheaty flavors, with less citrus or yeasty spiciness/fruitiness present than I would like, but it is there if you look for it. As Wheat beers go, this one is probably near the top of my experience, but it’s not the best (a distinction that still belongs Unibroue’s excellent Blanche De Chambly). It’s got a delicate complexity that’s a good match for the sushi though, and it’s certainly something I’d love to drink in summer (I probably should have waited!) B

Not an overwhelming start to the variety pack, but it’s an enjoyable brew and I can guarantee that some of the others in the pack will wow me.