Six men sit around a table. A projector is displaying a marketing presentation on the screen.

BREWER 1: What the fuck is this shit about?

BREWER 1: Hey shitdouche, you work in a brewery! You drink free beer all the time!

BREWER 2: You’re just jealous because I got the fucking good stuff!

KEN GROSSMAN: Hey! Every beer we make is “good stuff”

MARKETING WEENIE: Ok folks, let’s get started. We here in Marketing are proud to debut the label designs for our new Holiday ale.

MARKETING WEENIE:Picture this: A quaint little cottage in the countryside. Surrounded by evergreens, snow adorns its roof, smoke curling up from its chimney…

HEAD BREWER: Hey, shit-for-brains, he asked what it was called.

KEN GROSSMAN: Holy shit, yeah, duh, forgot about that. Where is it? All I see in this bucket here is a bunch of pale ales and IPAs.

BREWER 1 (under his breath): Fuuuuuuuuuuck

BREWER 2: What the fuck are we talking about here?

MARKETING WEENIE: You guys were supposed to bring a few bottles of the new holiday ale for us to taste.

HEAD BREWER: What!? So what the fuck is in all those fucking beer tanks out there!?

HEAD BREWER: What about all the cinnamon and nutmeg we were going to brew it with?

BREWER 1: Brewer 2 heard a rumor it would get him high…

MARKETING WEENIE (in unison):This is unbelievable. You assholes should be fired!

KEN GROSSMAN: Eh, not so fast. Do you still have any?

MARKETING WEENIE: So what are we going to do about the holiday ale?

BREWER 1: Shit, man, bottle that IPA and slap those Celebration labels on it. Done. This ain’t fuckin rocket science.

KEN GROSSMAN: You guys are fucking brilliant. I’m giving you all raises.

MARKETING WEENIE: This is amazing.

KEN GROSSMAN: Except for you, you’re fired. 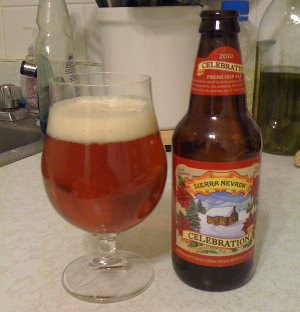 MARK: Yeah, so it’s pretty good, but I have no idea what makes this a winter seasonal. Pours a nice clear amber red color, with a solid, light colored head. Typical IPA smell of malt and hops, and a taste to match. Nice citrusy start, dry bready bitterness in the finish. There’s absolutely nothing about this that screams “Holiday” (except for the label), but it’s a good beer. B+

So I’m looking forward to Sierra Nevada’s upcoming summer seasonal, a Russian Imperial Stout. (What? That makes about as much sense as this one!)

Update: This should go without saying, but I obviously don’t think Ken Grossman (and his brewers) is a cinnamon snorting addict. However, I do think it would be funny if he was.

Again Update: Apparently I missed the opportunity to make fun of Sierra Nevada’s “green” industry practices (which are praiseworthy, to be sure, but also probably ripe for hijinks).