This was essentially my Christmas Eve, holy-crap-look-at-all-these-presents-I-have-to-wrap, beer. I actually wasn’t expecting to pick this up, but I had to make a trip to my Aunt’s house, and wouldn’t you know that she lives right near a Delaware liquor store that happens to have an awesome beer selection. I was actually surprised it was open, but then, business appeared to be booming. Anyway, a few beers caught my eye, including this one: 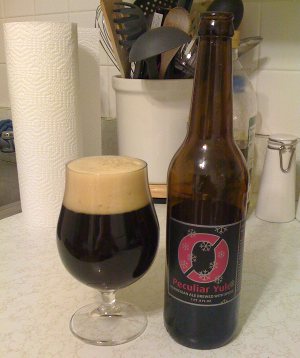 Nøgne Ø Peculiar Yule – I’ve noticed bottles from this brewery for a while. They’re very well designed and apparently have a decent reputation, so when I saw their holiday ale, I figured it was time to give Nøgne Ø a shot. Me being the nerd that I am, I always thought it had something to do with the null set, but apparently the brewery name is old Danish for “Naked Isle” and is a reference to an Ibsen poem. Pours an opaque, very deep, dark brown, almost black. Solid finger or two of head with lots of lacing. Cinnamon dominates the nose, but there’s some malty sweetness there as well, and you get some bitter hoppiness as it warms as well. Taste starts off sweet and spicy (The cinnamon is in there, but it doesn’t overwhelm like it does in the nose, so you get some more complex flavors here), but it ends on a note of dry hoppy bitterness. Indeed, this hoppiness character seemed to grow as I drank, including some citrus notes. It’s certainly not a hop-bomb or anything, but it’s there, and it’s something I haven’t seen (er, tasted) in, well, any of this year’s winter seasonals (save Sierra Nevada’s Celebration, which, as I mentioned in that post , has nothing really wintry about it). A good amount of carbonation and a medium body make for a very drinkable beer. It doesn’t blow me away, but it’s pretty damn good and while it has a warming spiciness to it it, it’s a nice change of pace from other wintry beers. B+

I hope everyone had a great holiday!