After the Christmas festivities, I just wanted to site down and relax with some good beer, so I popped open one of my favorites of the season: 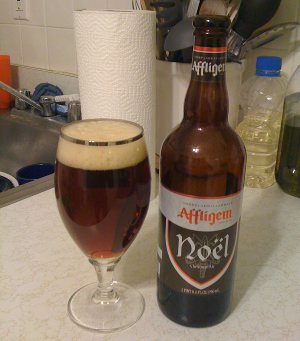 Affligem Noël: It’s strange, I don’t see much about Affligem in the beer nerd community. Perhaps because they have a relatively steady lineup of 4 beers (including Noël, the one seasonal on their roster). That being said, according to the bottle, this Abbey has been brewing beers according to a recipe orginating in 1074, and damn, everything they make is great, including the Noël. It’s gorgeous color, a deep orange/brown with a finger of light-colored head. Smell is crisp and clear, a little yeasty and maybe some fruit. Taste starts sweet with some dark fruit flavors, then you get some spiciness and a crisp, but not very bitter finish. It’s a wonderful and well balanced beer. The carbonation is a bit high, but given the relatively high ABV, that actually makes it more drinkable. This carbonation subsides a bit as it warms, at which point it begins to take on a more boozy flavor, but nothing overwhelming or bad. It’s a little more different than Affligem’s standard Dubbel (one of my favorites) than I was expecting, but it’s a fantastic beer and among the best of the winter seasonals I’ve had this year. A

I believe this marks the end of this year’s formally holiday beer, though I do have a few stouts and other wintry seasonals waiting in the wings.