All Dogfish Head beers have a story at their core, and this one is no exception. It apparently started back in 2003, when Sam Caligone (of Dogfish Head), Bill Covaleski (of Victory Brewing) and Greg Koch (of Stone Brewing) got together and formed something called BUFF, which stands for Brewers United for Freedom of Flavor. As near as I can tell, there wasn’t much of a point to BUFF until earlier this year, when the three brewers collaborated on a recipe for a saison style beer. The most notable thing about the recipe is that it prominently features parsley, sage, rosemary and thyme (presumably a tribute to the album, but also to the craft brewery tradition of using lots of ingredients). Each brewer took the recipe back to their respective brewery and made a batch. Earlier this summer I had a couple of Victory’s batch and while I enjoyed them, I came a way a little disappointed. Anyway, I recently spotted a bottle of the Dogfish Head version and thought I’d give it a shot: 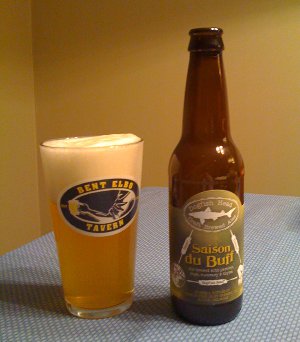 Dogfish Head Saison du Buff: Pours a slightly cloudy light yellow color with a big head. Lots of lacing as I drank. More aromatic than the Victory version, smelling mostly of spice and some floral hops. Taste is bigger and spicier than expected, with some yeasty notes and that floral hoppiness at the end (not very bitter though). Very carbonated and a little harsh (I guess that sounds bad, but I kinda like that characteristic), but it seems to mellow out (in a good way) as it warms up. I’m getting more earthy, hoppy notes as I get towards the end, making it one of those beers that improves as you drink. Overall, pretty damn good. I wouldn’t put it at the top of my favorite saisons, but it’s close and I’m enjoying it more than the Victory version. B+

Now this makes me want to find all three and try them all, one after the other. At this point, that’s pretty unlikely though, so I’ll have to settle for trying to find a Stone version…