Today was beer club! The event seems to have waned a bit in recent months, but we’ve always got a core group of about 4-5 folks who always come and always bring new beers. I’m pretty excited for the next beer club meetup in about two weeks, which will be at The Whip, an English style pub that we went to a while back. Anyway, tonight’s offerings included: 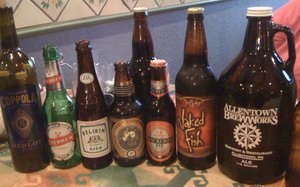 No real theme this month, though one member had just gotten back from a cruise and thus had smuggled some Caribbean beer. Otherwise, it was kinda stoutish this month. Here’s what we had (listed in order of left to right from the picture above):

And that about covers the beer. As usual, take the ratings with a grain of salt, as conditions were not ideal for uber-beer-nerdery (but they were ideal for fun, so there). I do kinda fudge the club name a bit, as it’s more of a “beverage club” or even just a “supper club”, meaning that not everyone who comes drinks beer. In the past, we’ve had Sake, root beer, and almost always wine. This month was no exception – we had a bottle of Coppola Merlot, which to my palate tasted quite sweet, with a nice dry finish. But then, I just finished sampling a bunch of roasty stouts. All in all, another successful outing. Look for the Whip recap in about two weeks! And it would probably make sense to do a fall seasonal theme next month too. Exciting!