Stonefruit saisons used to be quite a commodity in the beer world. I suppose they still are, but the sheen has worn off in favor of hazy cans with cryptic label art that you can post on social media and say “this is great” and no one will be able to dispute you because there’s no name on the goddamn label, just some exquisitely rendered painting of a ram with, like, gothic armor and its skull is partially exposed for some reason, and despite the seemingly unique subject matter of said artwork, there are about three hundred and thirty seven cans that essentially look identical, and yet are made by different breweries all over the planet that are doing good deeds by employing a local photogenic artist and it’s like, wait, what was I talking about? Right, saisons with stonefruit.

So this is Side Project’s Saison du Fermier racked into French Oak Cabernet barrels with 120 pounds of peaches. If you do the math, this winds up being about 4-5 pounds of peaches per gallon of saison. I’m informing you all of this because, of course, you know what 4-5 pounts of fruit per gallon of beer means. I mean, like, I’m sure you’ve all done homegrown mad-scientist experiments with fresh fruit and an incredible saison base that you made with yeast foraged from your family farm decades ago, and meticulously recorded the results such that you know precisely what to expect given specific ratios of fruit to beer (and let’s not forget the variations of extended aging in Frech Oak wine barrels). To you, it’s not just “wow, 120 pounds of peaches per barrel sounds like a lot“, no, oh no, you know exactly what you’re getting. Right, so sarcasm aside, you know those Casey Family Preserves bottles people go bonkers over – they’re fruited at a rate of around 2 pounds per gallon. So that should give you an idea of what we’re up against here.

In accordance with the Kaedrin tradition of unfounded speculation, I have learned that this beer was inspired by that 90210 episode where the entire gang joined Brandon’s crusade to save the Peach Pit from being torn down to make way for a mall… except, of course (of course!), Brenda. Don’t be Brenda. Buy this beer and support Cory King’s committment to saving local business from predatory developers. You heard it here first*!

Side Project Pêche du Fermier – Pours a hazy pale gold color with a solid finger of white head, good retention, a bit of lacing. Smells great, tons of peaches, a hint of lactic funk, peaches, maybe a bit of oak, peaches, and then I also get peaches. Just saturated with peaches. Taste also prominently features peaches, though perhaps not quite at the same saturation level as the nose, I get a little more in the way of earthy funk, a moderate sourness, and oak in the flavor, but I need to make sure you’re aware: peaches are present throughout. Mouthfeel is well carbonated, crisp, low to medium bodied, with a moderate acidity that is quite pleasant. Overall, if you like peaches, you’ll love this, because I’m pretty sure peaches are involved, and it’s certainly one of the better Side Project bottles I’ve managed to get ahold of… A- or A

As always, Side Project is a treat. One of these days I’ll track down a bottle of their barrel aged stout our barleywine or strong ale or whatever it is that’s barrel aged but not sour. I’m pretty sure I’d enjoy it.

* Naturally, the reason you’ve heard it here first is that I made the entire thing up because I wanted to make a Peach Pit reference. Kaedrin: Come for the beer, stay for the cutting edge cultural commentary.

Cory King’s brewing career began in the typical way; an obsessed homebrewer turned pro, he also had lots of experience on the business side of things, having worked in distribution and craft beer bars. He got snapped up by Perennial and quickly made a name for himself there. Like a lot of homebrewers-turned-pro, he eventually felt like he was in a rut and wanted to experiment more. The owner of Perennial perhaps recognized that wanderlust and did a little jujitsu move by pitching King on opening his own brewery… inside Perennial. It began as, you guessed it, a little side project with a few barrels of mixed fermentation stuff. Once the Side Project was formally announced, it was an immediate smash. This was back when people stilled lined up for saisons, so it was sorta mutually beneficial for Perennial, as the taproom would do brisk business while folks lined up for rare, small-batch Side Project releases. After a couple of years, King parted ways with Perennial and built his own brewery with his now well-established brand.

Originally focused on yeast, mixed fermentation character, barrel-aging, and blending (notably missing from this profile: hops), their offerings range from saisons and sours to bourbon barrel aged monster stouts and barleywines (the latter of which seem to command the majority of hype these days). What I got my hands on was a series of relatively straightforward saison blends. 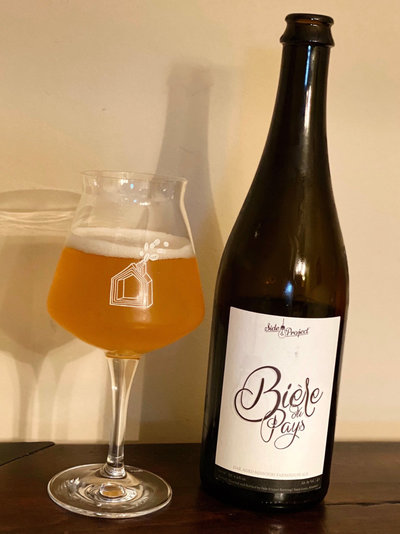 Side Project Bière du Pays – “Beer from the country”, a pretty standard mixed fermentation saison aged in Missouri oak that appears to be something of a staple for Side Project; it provides the base for lots of fruited variants, for instance. Pours a very pale, straw yellow color with a solid finger of fluffy white head, decent retention. Smells sweet, musty, a little spicy phenolic thing going on too. Taste is sweet, light stone fruit, a hint of spice like clove, a little funky earth and a bit of tartness in the finish. Mouthfeel is light and crisp, well carbonated, very light acidity. Overall, this is a very nice, light bodied saison. B+ or A- 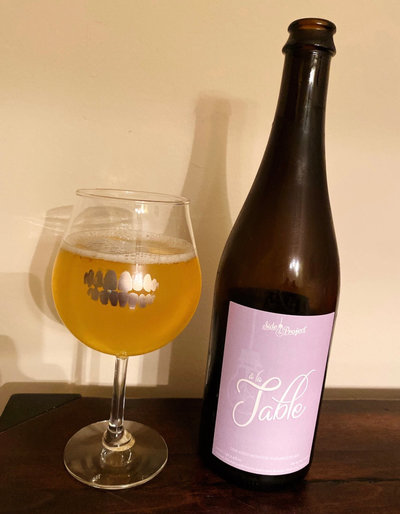 Side Project à la Table – As the name implies, this is a very low ABV “table” beer, much more in keeping with the historical saison. Pours a clear, even paler yellow color with a half finger of white head that doesn’t last too long. Smells of white wine, grapes, only a hint of funk and spice lurking in the background. Taste hits a similar note, white wine grapes, maybe a touch of tartness but nowhere near sour, and just whisps of spice and funk. Mouthfeel is light bodied, crisp, dry, and refreshing, goes down way too fast. Overall, this packs a heck of a punch for a 2.5% ABV beer. That’s not to say that it’s intense or unbalanced, just that it’s very good at what it’s going for. B+ or A- 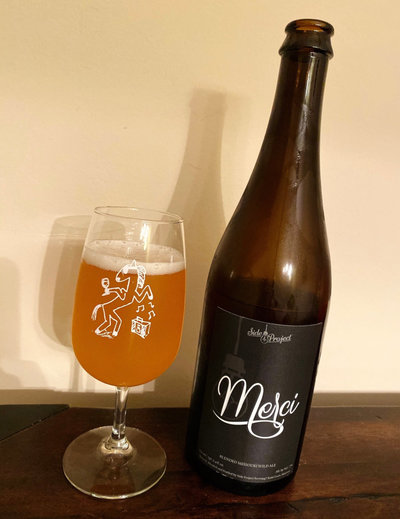 Side Project Merci – A special blend of four different beers made as a “thank you” for a local beer and wine purveyor who had supported Side Project. Pours a slightly hazy golden yellow color with a finger of white head that has moderate retention. Smells a little funky, lemony fruit, a little earth, a little spice. Taste starts sweet, hits some funky belgian spice notes, then turns fruity and tart through the finish. Mouthfeel is moderately carbed, medium bodied, good amount of acidity. Overall, probably the most intense of the three, but not as quaffable. B+ or A-

A pretty solid start for Side Project, and I’ve had a couple other fruited variants of Bière du Pays at various shares over the past couple of years. Certainly worth checking out for saison fans, and obviously I want to get a taste of some of those stouts and barleywines, all of which sound fantastic…