Most of the attention of the Vermont beer scene is laser focused on Heady Topper, Lawson’s, and Hill Farmstead. For the most part, this attention is well deserved, but it also means that a lot of other Vermont beers fly under the radar. The goal of Vermont Beer Roulette, wherein I purchase beers I’ve never heard of, is to unearth some of these hidden gems. It’s happened before, and I’m sure it will happen again. Foley Brothers is a brewery discovered in the original Operation Cheddar, and I really enjoyed their Native Brown Ale. Their Native IPA, not quite as much, but I still had high hopes for Fair Maiden, their new(ish?) Double IPA.

Alas, despite being generally well received, it’s not a beer that I connected with, though it’s certainly possible that I got an older bottle (the bottle had no freshness dates on it that I could find). It wasn’t terrible or anything, just disappointing. I do think that at least part of the reason some of the other VT IPAs are so well regarded is that they are almost always consumed fresh, usually absurdly so. Given that I saw this on multiple shelves all over the state, I have to wonder how long it sat there… Well, let’s take a closer look. 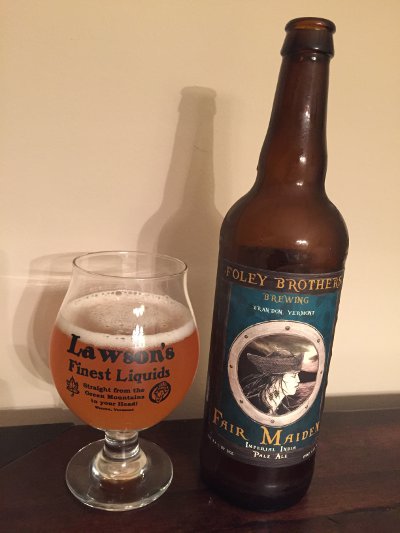 Foley Brothers Fair Maiden Double IPA – Pours a golden color, almost orange, with a finger of white head. Smells sugary sweet, with some citrus and pine hops in play, some biscuity malt too. It’s a nice nose at first, but it doesn’t last. Taste is also pretty sweet, lots of crystal malt character, citrus and pine hops, a little smack of bitterness in the finish. As it warms, the sweetness rises and the hop character falls off. I suspect this is showing some age (not a ton, but enough to impact the beer). Mouthfeel is medium bodied, well carbonated, and a little sticky, getting stickier as it warms (a 12 ounce bottle may have fared better in this review). Overall, it’s a straightforward DIPA, but it doesn’t compare to the VT competition (and it’s probably similar to a gazillion other things). It’s a decent enough pour, but not something worth going nuts over. B-

I guess they can’t all be winners. I may be induced to take another flyer on Foley Bros stuff in the future, but at this point, I may look to further explore some other breweries…

This will be the fourth, and sadly, final round of Vermont Beer Roulette that we’ll be playing this year. For those not following along, this is when I pick up a random Vermont beer that I’ve never heard of and drink it to see what happens. So far, we’ve had decent luck, but I have to admit to cheating a bit with this one, since Foley Brothers Native Brown Ale was a beer I snagged last year, so this is not as “random” as the other roulette contestants. It’s ok, go ahead and clutch your pearls in horror at my transgression, I deserve it. 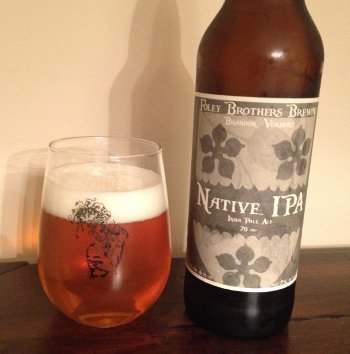 Foley Brothers Native IPA – Pours a clear golden color with a finger of fluffy white head. The smell is full of citrus and pine hops, maybe some floral notes poking around as well. The taste follows those lines, with lots of citrus and pine hop flavors, some floral, maybe even herbal notes picking up towards the bracing, bitter finish. Mouthfeel is very light, maybe even a bit on the thin side, but it’s very crisp and clean and goes down quickly. Overall, a solid IPA, nothing earth-shattering, but worthy of a try. B

My Vermont haul goodies are dwindling at this point, so you can expect the near relentless onslaught of hoppy beer reviews to slow a bit in the near future. It’s one of the tragedies of beer acquisition that it seems like I always end up with, like, 10 amazing beers in the same or similar styles. I really do try to keep things varied in terms of what I review, but sometimes I end up reviewing 10 IPAs in just a few weeks. We will hopefully get away from that in the coming weeks…

While Operation Cheddar was predicated on acquiring beer from the Holy Triumvirate of Vermont Brewers (Hill Farmstead, The Alchemist, and Lawson’s Finest Liquids), I was also pleased to pick up a few random bottles from Vermont breweries that I’d never heard of. This one is from Foley Brothers, a small family business consisting of an Inn, a winery, and most recently, a brewery. The brewery is less than a year old, but they seem to be churning out some solid stuff. Not Hill Farmstead level hyped stuff, but this brown ale brewed with VT grown hops and maple syrup sounded pretty tasty, so I took a flyer on a bottle at the Warren Store: 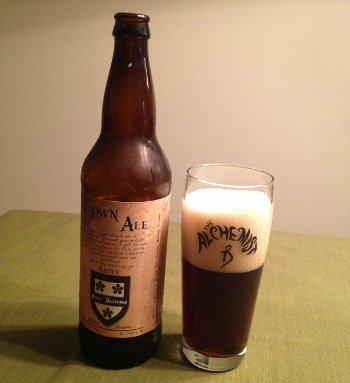 Foley Brothers Native Brown Ale – Pours a clear brown color with a solid three fingers of fluffy tan head and plenty of lacing. Smells of your typical toasty brown malts, with a sweet, almost fruity kick, presumably from the maple syrup. The taste has that same sweet maple syrup kick to it, which sorta puts the brakes on your typical brown malts, though they still peek out for some toasty fun in the middle and finish. Mouthfeel is highly carbonated, medium bodied, with some richness up front yielding to dryness in the middle and finish. Overall, this is a very good Brown Ale, a style I’m not normally really big on, but this gives it a nice twist. B+

I’d certainly be curious to try more from these fellas. Their Redbeards Ale, while not garnering much the way of ratings, certainly sounds interesting (a hoppy strong red ale)…