Sometimes I’m a little dismayed at how often I rate things a B+ or higher. Ratings are ultimately a fickle, subjective thing, but lately, it seems like I’ve been handing out an awful lot of A- scores. I’m still pretty strict with the A and A+ ratings (maybe even too strict when it comes to that most hallowed of rating), though I certainly encounter my fair share of those as well. Conversely, it’s pretty rare that a beer ever gets anything in the C range, let alone lower.

Now, obviously I don’t go out of my way to drink bad beers or things I know I won’t like, but I also don’t want to succumb to the hype machine or get locked into poor heuristics. So when I encounter a beer that I assume I’ll love, but don’t, I’m actually a little reassured. I mean, it sucks, but they can’t all be home runs. So here’s a couple beers I was very disappointed with recently. 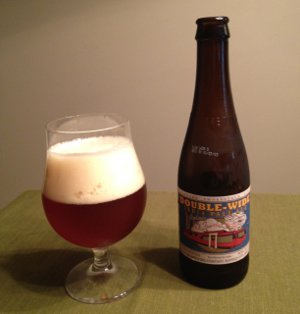 Boulevard Double Wide IPA – I kept hearing good things about about these Boulevard Smokestack Series beers, so on a recent beer hunt, I picked up a couple. Pours a golden amber color with tons of fluffy head. Smells of big, juicy American hops, plenty of citrus and pine. Taste also smacks of citrus and pine hops, with a well matched malt backbone and a bitter finish. Actually, that finish also has a bit of a boozy bite to it too. It’s not huge, but it definitely detracts from the experience… The mouthfeel is highly carbonated with a medium body and plenty of that booze. Overall, a rather straightforward DIPA, but far from world beater. It’s not bad, per say, and I’m sure I would enjoy sucking a few of these back, but it’s not something I’d ever really go out of my way for. B

Not a terrible first at bat for Boulevard, but not a particularly impressive one either. On my scale, it’s not that hard to get to that B+ rating with a DIPA. I’ve got their Sixth Glass quad sitting around too, so we’ll see what that one does for me. 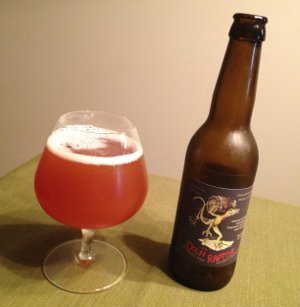 Birrificio Montegioco Dolii Raptor – Calvados Barrel Aged – If you read this blog, you know my affinity for barrel aged beers. This one, a Belgian style aged in Calvados (apple brandy) barrels made by one of them up-and-coming Italian craft brewers seemed right up my alley. Plus, look at the cute little raptor on the bottle. Who doesn’t love raptors? Alas, it was not to be: Pours a pale orangish brown color with minimal head. Smells of barrel aged booze (obviously the Calvados coming through), with perhaps some musty, funky Belgian yeast as well. There is, perhaps, a hint of a sour twang in the nose, and that hint of funk appears in the taste as well. It’s not that pronounced, which makes me wonder if it was intentional. The taste is sweet and very boozy, presumably due to the Calvados aging. The twangy tartness becomes a little more prominent as I drink, and not in a particularly good way. Mouthfeel is surprisingly light for such a beer, reasonably well carbonated to start, but fading off into slickness in the finish. This beer feels a little… sloppy and unbalanced. There’s definitely some sort of infection going on here. Some brewers do this intentionally with their barrel aged stuff, but let’s just say that these guys ain’t no Vinnie Cilurzo. Somehow, I’d rather drink this than most macros, but that’s a pretty low bar to clear. I finished the bottle, but I wasn’t too happy about it. C-

Yeah, so let’s just say that 8/4 wasn’t the most exciting of nights for me when it came to my beer selection. I did have a second bottle of Dolii Raptor that was apparently aged in different kinds of barrels, but it was pretty much the same thing. Maybe a little more sour, but just as sloppy and unbalanced. I’m not really sure what the difference really was – Beer Advocate has one classed as a Belgian Strong Dark, and the other as Belgian Strong Pale, but they were pretty much identical in appearance. So who the heck knows with those things. Not a particularly good first impression of the nascent Italian craft brewing scene, though obviously I can’t hold a single example up as indicative of the whole movement. I’m sure I’ll try a few others soon enough…

Anywho, don’t you worry about me. I’ll be back to posting A-level scortchers in no time.