Back in the early days of this blog, I used to harbor the notion that I would differentiate myself by pairing movies and beer. Even though I’m often watching movies as I drink, it was never a particularly well thought out idea and eventually fell by the wayside (though it is occasionally revived). But every once in a while, an opportunity presents itself. I’m sure fans of bad horror movies know where I’m going with this, but this past weekend marked the convergence of two great slasher movies, and in one case, the perfect beer to match.

First, Friday was the 13th, so I plopped in my favorite installment of that venerable series: Friday the 13th Part VI: Jason Lives. Not many franchises can boast the sixth movie in the series as the best, but this is one of them (I will accept cases for the original or Part IV, but VI remains my favorite). It’s got the best opening in the series, culminating in a cheeky tribute to the James Bond title sequence. It’s very self-aware and funny (a full decade before Scream), but also has some genuinely creepy visuals and plenty of gory death (in, like, a fun way). Oddly, it’s the only movie where actual children show up at Camp Crystal Lake (i.e. not just camp councilors). Certainly not everyone’s cup of tea, but as slasher movies go, it’s pretty tops. I didn’t have anything particularly relevant to pair with the movie, so I just grabbed this IPA made in LA because it was mildly fresh and I didn’t want to let it linger in the fridge for too long (and besides bitter hops and horror movies go together well, right?) 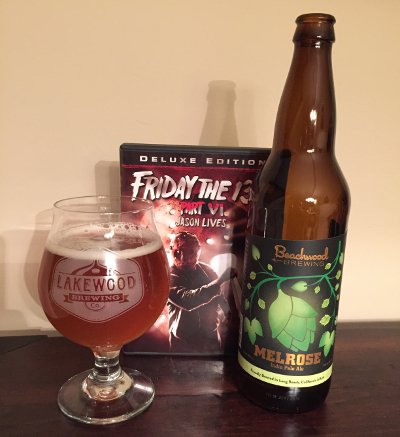 Beachwood BBQ Melrose IPA – Pours a mostly clear, pale gold color with a finger of white fluffy head that leaves plenty of lacing as I drink. Smells amazing, huge citrus bomb, big grapefruit and mango aromas, maybe some pine and floral notes too. Taste hits those big citrus hop flavors hard, lots of grapefruit, not as much mango as the nose, a little floral and pine, and a moderate bitter bite in the finish. Mouthfeel is well carbonated, on the lighter end of medium bodied, relatively dry finish, moderately quaffable. Overall, nothing hugely revolutionary here, but it’s a rock solid, well above average IPA. B+

Next, Saturday was Valentines Day, and since slasher movies have mined the calendar of holidays pretty thoroughly, we’ve got My Bloody Valentine. Part of the seemingly endless glut of Halloween and Friday the 13th imitators put out in the early 80s, this is one of best non-franchise efforts out there. It hits all the standard slasher tropes and it’s a lot of fun. It’s pretty silly at times too, but the whole miner’s suit and pickaxe make for a great villain, and I love the little poems he leaves for the police (“Roses are red, violets are blue, one is dead, and so are you”). It had a remake in 2009 (in 3D!) that didn’t quite capture the magic, though I guess is fine in its own right. Anywho, someone over at Alesmith must be a big horror movie fan, because they make a beer called Evil Dead Red and a cousin called, yes, My Bloody Valentine. On paper, both horror themed beers seem almost identical – both red ales, both with the saucy ABV of 6.66%, same IBUS, etc… In practice, well, let’s take a look: 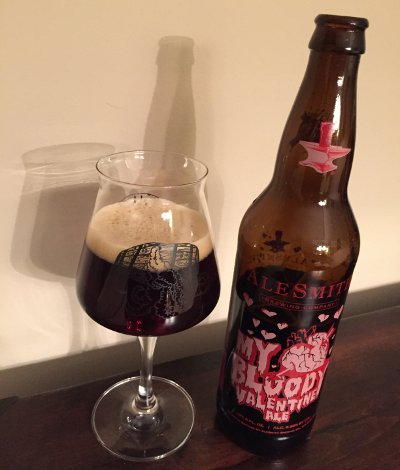 Alesmith My Bloody Valentine – Pours a deep, dark red color with ruby highlights (yes, robey tones) and a finger of tannish head. Smells of crystal malts, a hint of toast, maybe some light caramel and some earthy hops. Taste follows the nose, very malt focused, crystal malts, a bit of toast, maybe some chocolate, caramel, with a crisp, earthy hop bite towards the finish that rounds it out nicely. Mouthfeel is well carbonated and medium bodied, quite approachable. So this is a much more traditional red ale than Evil Dead Red, which incorporates much more in the way of big, citrusy, piney American hops. They don’t specify the hops for this, but I wouldn’t be surprised if they were old-school noble hops or something along those lines, maybe Cascade. I tend to prefer my reds on the more piney, resinous side (Evil Dead Red is definitely my speed), but this was a nice change of pace too. As the Beer Rover notes, “This beer will not stun you with its brilliance, but it will not disappoint, either.” B

I really must figure out a way to snag me some barrel aged Alesmith brews. I’m not a huge coffee fan, but the BA Speedway does sound mighty tasty. Still, might be better off with BA Old Numskull or BA Wee Heavy. Someday…