The eponymous Colonel Ricketts was an artillery officer in the American Civil War, playing a notable role in the defense against a Confederate attack on Cemetery Hill on the second day of the Battle of Gettysburg. Ricketts was apparently somewhat diminutive, but as he was in command of artillery, there’s a (probably apocryphal) quote by a confederate veteran, “And did this little cuss command Battery Hell!” After the war, Ricketts (along with some extended family) bought up a bunch of land in Northeast Pennsylvania. Upon his death, the heirs sold the land back to the state, and thus the Ricketts Glen State Park was born.

This is all relevant because one of Kaedrin’s regular R&R escapes is to the Pocono mountains near Ricketts Glen (for reasons I will not get into, my family has a connection with Lake Jean that has driven a few trips). On one weekend last fall, my brother and I spied this little Colonel Ricketts location on a trip into Benton for supplies. It’s basically located in an old barn-like structure, very rustic (a thousand pardons, I didn’t take any pictures). We did a quickie tasting of a bunch of their offerings, all apple ciders (more like apple wine, actually) and thought it was good stuff. I liked this one the best, so I bought a bottle.

As previously established, I’ve never really caught the cider bug, but it is something that a lot of beer nerds seem to gravitate towards at one time or another. Will this change the tide? Not really, though it’s a nice change of pace and a welcome diversion now that I’m in my annual semi-slowdown from beer. 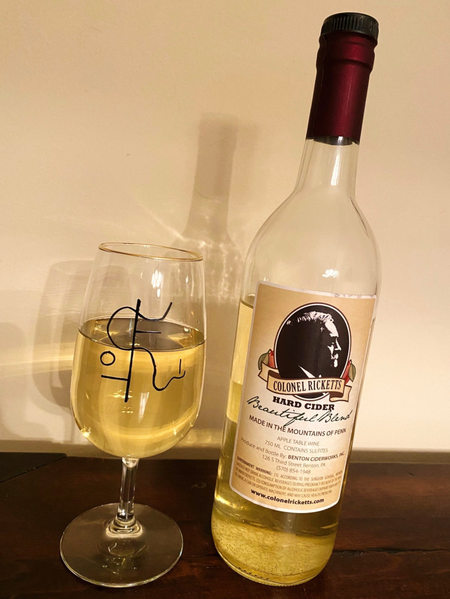 Colonel Ricketts Hard Cider Beautiful Blend – As the name of this cider implies, this is actually a blend of two other Colonel Ricketts offerings: 1. Apple Sip, a semi-sweet cider with strong apple flavor aged in barrels and 2. The Original, a semi-dry cider with more of a barrel finish. The result has a very distinctive, earthy, almost nutty character that impressed me. More boring tasting notes: Pours an extremely clear, very pale yellow color, perfectly still. Smell has some of that sweet apple, but also something almost nutty lurking in the background that keeps me sniffing the glass like an idiot. Taste has that same sweet apple character, not really nutty but with a slight earthiness that’s pleasant. Mouthfeel is crisp and clean, no carbonation, only a hint of underlying booze. Overall, I enjoy this… It’s no replacement for beer or anything, but it’s a nice change of pace.

Beer Nerd Musings: These ciders were aged in barrels, and while there’s something to that, it definitely doesn’t provide the bold, intense flavors that barrel ageing brings to most beers. In talking with the guy who ran the place, he said they used a variety of barrels, including Jack Daniels, wine, and so on. I got the impression they reused the barrels though, which could perhaps lessen the impact over time. Would these second use cider barrels make for a good third use with beer? Maybe? It wouldn’t be as big an impact as Apple Brandy barrels (which tend to be a mildly popular and distinctive choice for beer barrel aging), that’s for sure, but maybe for sours it could be a good vessel.

And that about wraps up the cider portion of this year’s beer slowdown. Stay tuned, we’ve got some bourbon coming up later. Then: a triumphant return to beer (both in terms of reviews and, like, actually drinking beer).