At the beginning of each year, it’s good to generally take a step back and reflect on where we are and where we’re going. Seeing as though we’re halfway almost through February, I’ve pretty much missed out on the usual timeframe for such musings, but said timeframes are mostly arbitrary anyway, so why not do a belated year-in-review? I mean, sure, hundreds of reasons, but nothing that’s convincing me not to, so let’s hop to it, shall we?

At this point, I usually do a top “new to me” beers of the year list, but the decline in blogging will result in a smaller list. Standard disclaimers apply: this is a list of beers that were new to me this year and which I reviewed on the blog. It’s not an all time favorites list, so if you don’t see something on here, then maybe I didn’t try it this year or perhaps I had it in a previous year. Or you have bad taste and are a bad person. It could be that too. This is a naturally arbitrary exercise, but I always have fun with it and enjoy making lists like this. Lists are American! So let’s do this thing: 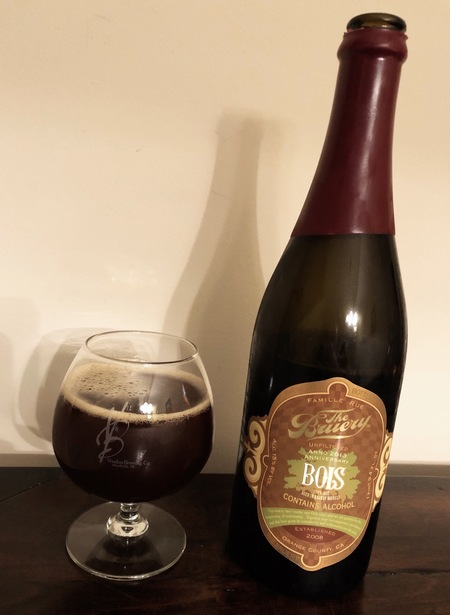 I’m a sucker for the Bruery’s Anniversary beers, and managed to acquire some of the variants aged in other barrels. The best of those was this Brandy barrel treatment. The Brandy complements the base and is just different enough from the normal Bourbon barrel aged version to make the whole enterprise worthwhile (Scotch and Wine barrel treatments are still good, to be sure, but only the Brandy rivals the Bourbon). The Bruery isn’t quite at the vanguard of beer nerdery these days, but I still love their Belgian inflected takes on barrel aged beers, and you’ll be seeing some more about them on the blog soon enough…

This just about wraps things up. I’ve got a bit of a backlog of reviews to plow through, so keep your eyes peeled, more coming soon…