So we all know that the regular Dark Star beer is named after the obscure Carpenter/O’Bannon film (and totally not the popular Grateful Dead song), but this Spice Wars variant is a clear allusion to Dune. And not just any Dune, but the Expanded Dune universe. You know, those novels that were written somewhat recently by Frank Herbert’s son Brian Herbert (and co-written with the uber-prolific Kevin J. Anderson). The Spice War in question actually took place before the events of the original Dune and concerned a potential alternative to the Spice Melange (the war ended in disaster as that alternative never panned out). These Fremont folks are probably super-nerds, is what I’m saying (perhaps they should be called Fremen?)

That or this is just, like, a spiced version of BBA Dark Star. Fremont uses their typical practice of blending several barrel ages here as well, this time consisting of a blend of 18, 12, and 8-month Bourbon Barrel-Aged Dark Star in 12-year old Kentucky bourbon barrels. The spice regime includes cinnamon, nutmeg, allspice, ginger, vanilla, and clove. This sort of thing probably puts this in more of a winter warmer or Christmas season beer, but I couldn’t really wait that long, so I just scarfed it down at the first opportunity. Let’s delve into this, Harkonnen style: 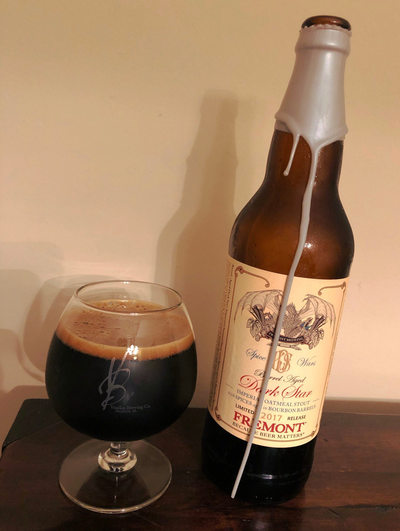 Fremont Barrel Aged Dark Star – Spice Wars – Pours a deep, dark black color with half a finger of light tan head. Smells very nice, lots of spices along the lines of cinnamon and nutmeg, some ginger showing its face too, hints of underlying stout base like caramel and roast, the spices mostly hiding the barrel in the nose. Taste has more of that rich caramel up front, followed quickly by a cavalcade of spices, cinnamon, nutmeg, and ginger, returning to caramel, with hints of the underlying roast, more spice, and a light bourbon, oak, and vanilla in the finish. It’s a real roller coaster of flavor. Mouthfeel is rich and full bodied, well carbonated, spice combining with booze to provide a little pleasant heat. Overall, it’s a very nice winter warmer-ish beer. Doesn’t really rival the plain-ol’ BBA Dark Star, but it’s a nice change of pace (would probably have been better to drink during the holiday season!) I didn’t have a problem drinking the bottle, but this is the sort of thing that would be absolutely perfect for a share. B+

As per usual, the fancily flavored variant is a nice change of pace, but doesn’t quite eclipse the original. I will say that the Coffee variant, which I shared with a bunch of friends due to my legendary ambivalence to coffee, went over very well and was actually pretty damn fantastic. Stay tuned for another Fremont variant (of B-Bomb), coming soon to these pages.