In this age of bombast and hyperbole, it’s hard to write about lagers. Beers prized for their crisp, clean, delicate flavors, and the subtlety contained therein generally take a backseat to the extreme, the intensity or concentration of flavors in something like an imperial doughnut brownie chocolate stout aged in 30 year old rum barrels. For better or for worse, there’s a lot to talk about with those beers. Where’d the doughnut come from? Was the brownie batter cooked before added to the mash? Or was it a sorta dry-hopped with brownies? What became of that rum? Why was it aged 30 years? Where was the chocolate sourced from? It better damn well be bean to bar chocolate, or there’ll be hell to pay!

Here there’s just the requisite four beer ingredients. The only real distinction to make is that Qualify Pils differs from Suarez Family Brewing’s other pilsner (Palatine Pils) in that it is a little more “hop-accented”. Big whoop; they don’t even talk about which hops they used. It’s probably an extremely unsexy noble hop of some kind too, given the traditional German take on the style. Of course, both of Suarez’s pilsners are pretty damn fantastic, and well worth trying out if you ever get the chance. 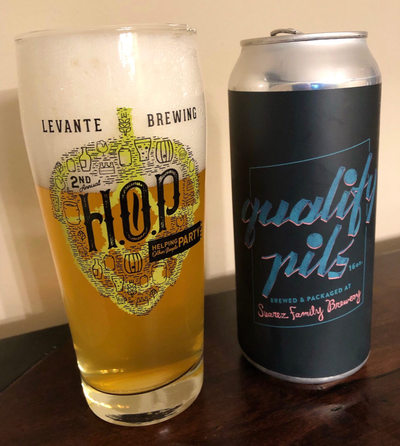 Suarez Family Brewing Qualify Pils – Pours a slightly hazy pale yellow color with a few fingers of fluffy white head, fantastic retention, and lacing as I drink. Smells very nice, earthy, almost spicy noble hops, a crackery malt character and maybe a hint of lemon zest. Crisp, clean cereal grains up front followed by earthy noble hops and that hint of lemon zest to put the finishing touch on it. I’d have to try it side by side with Palatine Pils to be sure, but this does indeed seem to have more hop character to it. Or I’m just a weak-willed simpleton who has been bulldozed by the power of Suarez’s suggestion. Mouthfeel is well carbonated, crisp, and clean, light bodied and crushable. Overall, yup a fantastic pils here. A-

Another winner from Suarez, who is batting 1.000 so far in my experience (at this point, I’ve had at least 7 of their beers.) I hope to visit again this upcoming summer, so you’re certain to see more from them here. Keep a watchful eye.