Fremont, Washington is in Seattle and basically seems like a hipster wonderland. I mean, you see it described as “bohemian” and “quirky”, which basically translates to hipster. Fortunately, breweries seem to thrive in such environments, and Fremont Brewing fits the bill. They opened in 2009 and their barrel-aging program has made enough waves that those of us on the right coast have long craved a taste of their wares.

Enter B-Bomb, a barrel aged version of their imperial winter ale. This year’s vintage of B-Bomb is aged in 12-year-old American Oak bourbon barrels and is a blend of beer aged for 9, 12, and 24-months. Despite the “winter” moniker, this isn’t really winter warmer territory; no mulling spices as near as I can tell, just a big, strong, dark ale. Aged in barrels for a long time and blended. Basically, right in my wheelhouse. There are some variants involving stuff like coffee, cinnamon, or coconut, but I suspect that I would love the plain old B-Bomb the best, so let’s take a gander: 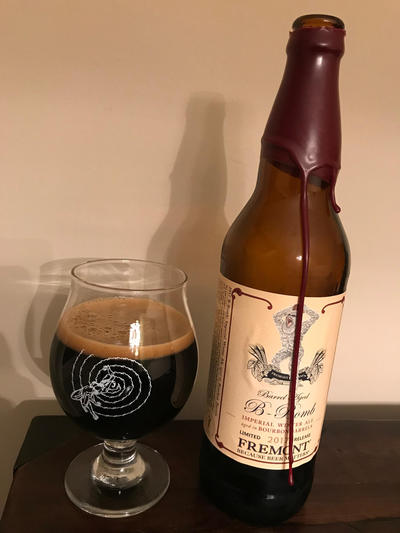 Fremont B-Bomb (Bourbon Barrel Aged Imperial Winter Ale) – The beer formerly known as Bourbon Abominable. Pours a very dark brown color with a half finger of tan head that manages to stick around longer than usual for this sort of thing. Smells fabulous, rich caramel, toffee, bourbon, oak, and vanilla, maybe something fruity lurking in the background. Taste follows the nose, tons of rich caramel and toffee, with a healthy dose of boozy bourbon, oak, and vanilla, a hint of roasted malt, a bit of fruit, finishing boozy. Mouthfeel is full bodied, rich, and chewy, plenty of heat and booze, appropriately moderate carbonation, well proportioned for such a monster. Overall, this is outstanding. A

I had a taste of this at a share a while back and it was glorious, so I’ve been on the lookout for more of their wares. Obviously, I want to try moar. Wink wink, nudge nudge (he sez, as if anyone is reading this).