An overdue recap of Operation Cheddar VI: Night of the Living Cheddar (my latest foray into Vermont hunting for beer) is on its way, but in the meantime, let’s look at a beer I drank in anticipation of that momentous undertaking.

Sue is a wine barrel-aged version of Susan, which is one of Hill Farmstead’s trademark bright, juicy, tropical fruity IPAs. This is… not the most likely candidate for extended aging. However, after two years in the barrels, the beer picks up lots of wine character and lemony tartness, making it much better than what an “aged IPA” would normally conjure.

So let’s get dressed up all in black, head over to San Quentin, and drink a beer named Sue*. “My name is ‘Sue!’ How do you do!?” 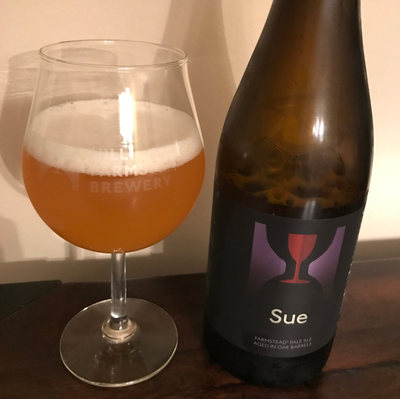 Hill Farmstead Sue – Pours a yellowish golden color with a solid finger of long lived head. Smells quite nice, oak, vinous fruit, lemons, and sneaking in the background are some of those dank, faded hops (very delicate aroma, it works). Taste has a nice sweetness to it, tons of that vinous fruit, wine, lemons, a bit of earthy funk, almost no sign of hops until well into the finish. MOuthfeel is medium bodied, crisp, and effervescent, with a relatively dry finish. Overall, much better than its description would imply – it feels like a solid, complex saison rather than an IPA (I’ll slap the American Wild Ale label on this one, but you could easily call it a saison). A-

Many thanks to Kaedrin beverage compatriot Dana for picking this up on her own invasion of Vermont recently. Several more Hill Farmstead offerings to come, as well as a full recap of Operation Cheddar VI, so stick around.

* Get it? Screaming hot Johnny Cash reference here. Somewhere I have a list of potential beer names, and one of them was A Beer Named Sue. I mean, not “Sue” (like the above beer) but literally “A Beer Named Sue”. I have no idea what it will be, and at my current rate of 1 batch per year it may be a while, but I will brew a beer and call it that. Someday.