The name of this beer harkens back to George Orwell’s Animal Farm, where the phrase “Four legs good, two legs bad.” is used as propaganda that initially helps clarify the animals’ goal to be free of human oppression, but which eventually devolves into a meaningless sound bleated by the sheep (“two legs baa-d”) that only serves to shut down dissent. As the novel progresses and the needs of the leadership change, the chant is modified to the ironic “Four legs good, two legs better”, which sounds similar but obviously means the opposite. Such reversals might sound silly, but this sort of thing happens all the time, even in science. For example, over-the-counter nasal docongestant sprays are effective… for about 3 days. After that, the user’s continuing stuffiness and congestion are actually caused by the product itself, something called a rebound congestion.

But I digress. I’m not positive why Sante Adairius named a beer after this infamous quote, but their blurb on the bottle mentions a three-legged dog, so one must assume that there is a rising tide of three-legged dogs plotting revolution in Capitola, California. And I, for one, welcome our new doggo overlords and would like to remind them that as a trusted blogging personality, I can be helpful in rounding up others to toil in their underground bone mines.

And I’m digressing again. The beer itself is labeled a “Belgian-style blonde Quad” (a “made-up beer style”) that is fermented in oak puncheons then aged for long periods in oak foudres. As befits the style-defying description, this was originally part of Sante Adairius’s 16e series of weird one-offs, but it appears to have graduated to a regular offering. Four Legs Good, three legs better? 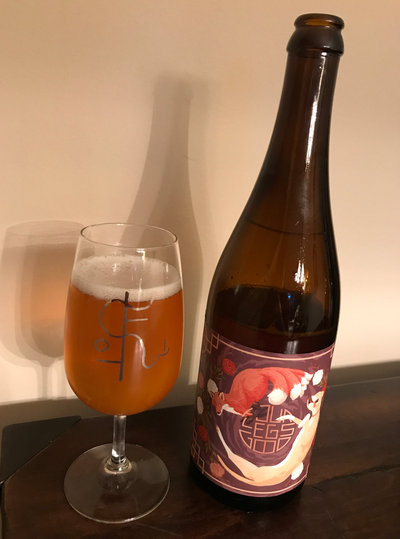 Sante Adairius Rustic Ales Four Legs Good – Pours a golden yellow color with a finger of white, bubbly head that sticks around for a bit. Smells nice, fruity and oaky, a little spice in the background. Taste is sweet and spicy, vinous fruit, with oak emerging quickly, followed by some tartness. Mouthfeel is medium bodied, well carbonated but a little sticky, plenty of booze. Overall, this is one damn fine beer, complex and tasty. A-

Fabulous stuff, as always. I got a small taste of a new(ish) 16e beer called Feeling Ursine (a tart barrel aged brown) that was decent, and I’ve got another SARA beer on its way. Certainly one of my favorite breweries to snag something from these days…