Bravo was Firestone Walker’s first barrel-aged beer, dating back to 2004 when they were still in the experimental stages of their first Anniversary blend (which is a process in itself). Since then, it’s always been an available component, even if it wasn’t bottled by itself and thus has not been widely imbibed. Labeled an imperial brown ale, it comes off as more of a highly attenuated strong ale hybrid barleywine type of thing (I believe that’s the official industry designation of style); the sort of beer that would be useful in balancing out more sticky sweet barrel-aged offerings in a blend.

For the past few years, though, we’ve seen Firestone cycle through their various blend components, sometimes retiring other offerings to make room for new ones. In this case, they retired our beloved §ucaba barleywine, one of the classics of the style, in order to make room for Bravo. Them’s some mighty big shoes to fill.

In addition, this is also the first of Firestone’s Vintage Reserve line to be released in 12 ounce bottles (still boxed, which remains a nice touch). This is kinda funny because while I sometimes think large-format bottles are a bit of a bear (i.e. Patrick Rue is trying to kill us all), Firestone’s beers are usually so well balanced and approachable that I could easily put down a bomber of any of their barrel-aged offerings. This does allow for more beer to be spread around though, and I suppose my waistline thanks them too. Prepare for the incoming “This was better in larger format bottles!” hot takes though.

Anywho, let’s strap on our Raymond Chandler hat and see if this beer is “as deadly as the bravo’s rapier”: 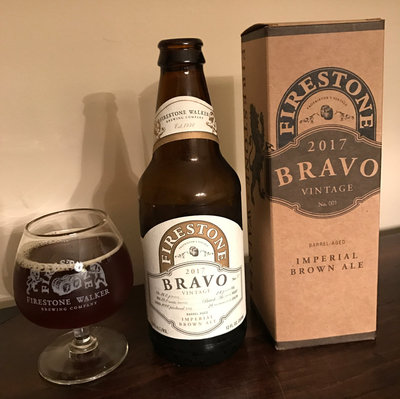 Firestone Walker Bravo – Pours a clear amber hued brown color with half a finger of off-white head. Perhaps a little lighter in color than your typical brown, but it works. Smells very sweet and candy like with bourbon, oak, and vanilla kicking in too. Taste starts off sweet, rich caramel, moving into bit of bourbon, oak, and vanilla, finishing with a touch of darker (but not roasty) malt and hop bitterness. Mouthfeel is medium to full bodied, with moderate carbonation and some warming booze, not exactly “dry” but not as sticky sweet as Firestone’s other barrel-aged beers. Overall, this is very good, I can see why it’d make a good blending component. On it’s own, it’s still worthy and worth seeking out. A-

Always a joy to try something from Firestone’s barrel aging program. At this point, I think I’ve tackled most of the obvious ones. The only things remaining are stuff like Imperial Walker’s Reserve or Rye Double DBA, which seem substantially more limited than the others. Regardless, I look forward to trying more in time!