Beelzebub is the name of a demon, sometimes used synonymously with Satan or the Devil, but more often referred to as the second in command, the chief lieutenant of Lucifer, the Emperor of Hell, and other such dubious honorifics. As John Milton sez “than whom, Satan except, none higher sat.” It’s believed to be derived from the Canaanite god Baal, who was sometimes referred to as the “Lord of the Flies” and there’s lots of conflicting accounts of Beelzebub’s true nature, almost as if no one has had any actual contact with… him? It? You guys, it’s time for some game theory.

Um anyway, there is, in fact, a beer named after Beelzebub. No game theory needed. The label even has a fly on it that our demonic friend is apparently the lord of. It’s one of The Alchemist’s rotating releases, a hoppy imperial stout clocking in at 8% ABV. This is the first non-IPA I’ve had from our friends in Vermont, and while it is indeed intense and unique, I don’t think it quite nails the style like their various IPAs manage. I got these cans in December and have been slowly working through them to see if a few months has softened the harsh edges. Alas, we have once again run into the this is pretty good, but it’s the worst beer from The Alchemist that I’ve had conundrum: 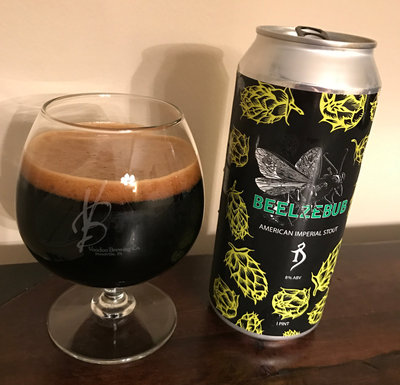 The Alchemist Beelzebub – Pours a deep black color, maybe the darkest beer I’ve ever seen (faintest hint of brown can be seen while pouring, but no light can otherwise escape), with a gorgeous finger of brown head. Smells of roasted malt, char, roast, some dank hops, roast, coffee, bitter dark chocolate, and did I mention roast? It’s roasty. Taste is rich and roasty, a little coffee-like (no actual coffee in it, but reminiscent), maybe some bitter dark chocolate, an intense roast, some dank hops, finishing with a big bite of roast and hop bitterness. Mouthfeel has a light richness to it, full bodied, well carbonated, not dry overall but there’s some sort of drying element going on here, tannins or something. Overall, this is an odd duck. This can is from December, and when fresh it was even more intense, but it’s held up quite well, and I like it a little better now. I’ve never had anything quite like it, which is interesting but there’s also probably a reason for that. Intense and roasty, certainly unique. B or maybe a B+, but we’ll leave it at B.

Many thanks to Kaedrin friend Adam for braving a snowstorm to acquire his allotment (and, obviously, for sharing with me). I am, obviously, still in the bag to try moar Alchemist beers, as Heady and Focal are some of the best out there and minor missteps like this can’t detract from that.