I did a pretty good job cobbling together a functional relationship with lagers last year, but have mostly fallen off the wagon in 2016 (I guess the barrel-aged Troegenator counts, but it feels like cheating). I know, I’m the worst and it’s not like I was really comprehensive last year or anything, but I have drank a bunch of lagers this year, just not anything I’ve reviewed. You guys don’t need me to tell you that Prima Pils is awesome, do you?

The brewery I keep coming back to for lagers of late is Jack’s Abby. Since we’re in full Oktoberfest season and since they put out very nice tallboys of their take on the style, I figured it’s time to get back in the swing. Last year, in reviewing one of their collaborations, I mentioned that they could turn me into a lager man yet. They responded: “ONE OF US! ONE OF US!” As a fan of that movie, this only endears them to me even more. Gooble gobble! 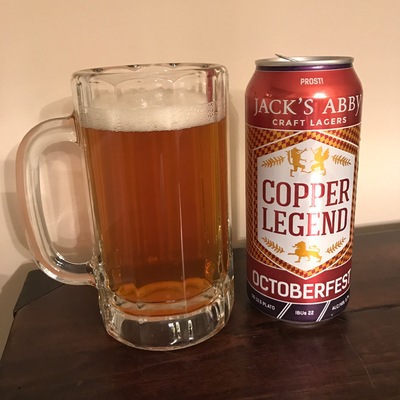 Jack’s Abby Copper Legend – Pours a burnished golden orange, dare I say, copper color, with a couple fingers of fizzy head that nonetheless sticks around for a while. Smells of bready, toasted, lightly caramelized malt, earthy noble hops. Taste has a great sweetness to it up front, again with the toasty, caramelized malt, and enough Euro hops to balance it all out. Maybe some nutty flavors as it warms up. Mouthfeel is medium bodied, well carbonated, soft, easy going, refreshing, near quaffable. Overall, yes, this is my kinda Octoberfest! B+

Alas, no other lagers in the review pipeline just yet, but I’m sure we’ll find something in the nearish future. In the meantime, I’ve got a ton of IPAs and DIPAs clogging that pipeline, so we’ll spend the rest of this week covering those…