Semi-local Tröegs has been steadily expanding of late, and one beneficiary of their success has been their barrel-aging program, which they call their “Splinter” series. They’ve been doing them for a while, but the initial offerings were very rare and dare I say, walezish. Recent expansions have allowed them to step up their game and the availability of these beers has been getting better (though nothing seems to approach those original sour offerings just yet), even for those of us who hesitate to drive out to Hershey on a whim. The two I have here were relatively recent releases, basically just barrel aged versions of standard-lineup offerings. Oddly, their names have changed from “Bourbon Barrel-Aged” to just “Barrel-Aged”, though I’m not sure if that means anything. In at least one case, the newer vintage has not lived up to the reputation of its predecessor, but it’s still pretty nice. Let’s dive in: 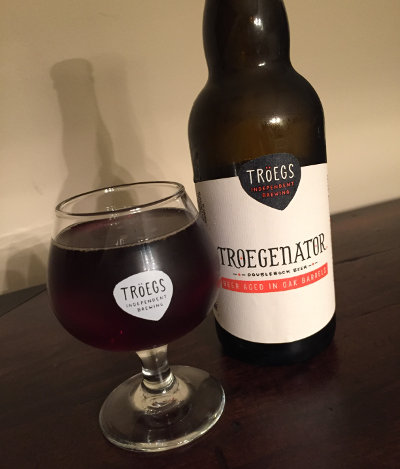 Tröegs Barrel-Aged Troegenator – Pours a dark amber brown color with half a finger of off white head that is short for this world. Smells nice, lots of fruity malt character, raisins, light on the barrel-aged character, but oak and vanilla are definitely there and it’s an improvement on the base. Taste hits the barrel aging notes more than the nose, adding rich sweetness, caramel, oak, vanilla, and booze notes to the base fruity malt character, which is lessened here in the taste. Mouthfeel is medium to full bodied, well carbonated but smooth, with a warming alcohol note. Overall, this is really nice, certainly an improvement on the base. A strong B+ 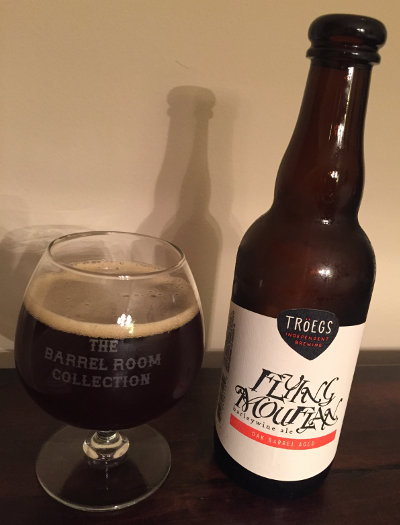 Tröegs Barrel-Aged Flying Mouflan – Pours a deeper, darker amber brown color with a finger of off white head. Smells good, less in the way of fruity malt but the slack is picked up with hops, again the barrel character is light in the nose, but it’s there, imparting some of that booze, oak, and vanilla. Taste again plays up those hops, a little dankness here before the booze, oak, and vanilla kicks in… Mouthfeel is medium to full bodied, well carbonated, perhaps a bit less smooth, but still with the warming alcohol. Overall, this is very nice, but far from a top tier BA barleywine, and honestly, I think I might prefer BA Troegenator… I could still give it a weak B+ though, and I thoroughly enjoyed it.

Now they just need to put Impending Descent into barrels (and maybe amp up that ABV to original Scratch offering levels before that) and I’ll be a happy camper. Regardless, I’m excited to see what comes out of the Splinter series in the coming months and years.