One of the things that emerged during the 1990s surge of microbreweries (and subsequent bubble burst) was an explosion of brewpubs. I mean, they weren’t a new concept, but the infusion of capital that happened in the 90s lead to a particular style of brewpub that went through a rough patch before settling into a rythm. You know the type. John Harvard’s (who used to be all over the place, but retreated back to their New England roots when times got rough), Rock Bottom, Gordon Biersch, and countless local chains. They’re not necessarily bad, per say, but they tend to be generic. Bright, spacious, competent, but bland and lacking personality. Newfangled brewpubs like Tired Hands, Forest & Main, and Vault are more idiosyncratic, warmer, more homey, and their beer is an order of magnitude better. Even their expansions seem more organic and less cookie-cutter. The oldshchool brewpubs that survived the 90s have generally done so by expanding their offerings into new and interesting territory than your standard brewpub lineup (i.e. light lager, pale ale, porter, wheat, etc…), but they often still feel generic. Around here, Iron Hill seems to do well with a nice atmosphere and decent taplist. They even opened one a block over from Tired Hands and seem to be holding their own. Not all of these brewpubs are doing that well.

Enter McKenzie Brew House. They’ve been around a while and there are 3 or 4 locations in the area, but I’ve always been underwhelmed by their offerings. I can certainly make due, but I’ve never had anything from them that blew me away. Until, that is, I got the chance to sample some of their limited bottled offerings like this one: a barrel-aged, dry-hopped saison, my kinda crazy. Stuff like this has actually been around for a while, but very limited and kinda under the radar. I’d always written them off because of their normally underwhelming taplist, but now I’ve seen the light. Hallowed Ground, indeed: 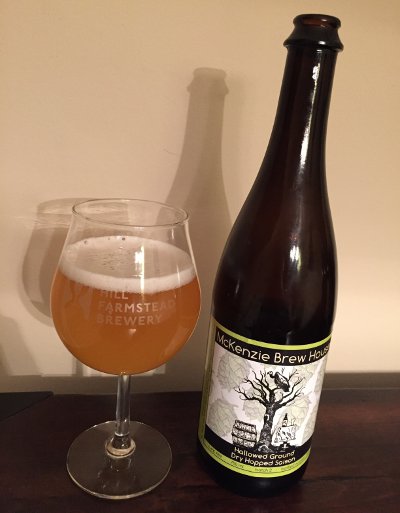 McKenzie Hallowed Ground – Pours a radiant golden yellow color, cloudy with a chance of a moderately dense finger of head and some lacing. Smells fantastic, some farmhouse yeast character, spicy and fruity, hints of lemon and lots of tropical citrus hops. Taste starts sweet and spicy with a light tart fruit character that blooms into full blown lemony sourness towards the finish, which also brings out a little of that citrus hop character as well. Mouthfeel is fabulous, highly carbonated and effervescent, medium bodied, light acidity. Overall, this is surprisingly fantastic! A-

Great, even when I think I have a local brewery pegged, they go and do something like this. I will most certainly be seeking out these special releases in the future.