On the first Friday of every month, there’s a beer blog roundup called The Session. Someone picks a topic, and everyone blogs about it. This time around, Jay Brooks wants to talk about Holiday Beers:

So for this Session, write about whatever makes you happy, so long as it involves holiday beers.

You got it, Jay! I’ll start with some brief answers to his questionnaire, then move right in to the 5 year Anchor Christmas Vertical tasting I held last night.

Do you like the idea of seasonal beers, or loathe them?

I love seasonal beers, but always try to keep some variety in the mix. Fortunately, the incredible breadth of beers available at all times allows for such exploration.

What’s your idea of the perfect holiday beer?

That’s a tough one, and I enjoy the variety of holiday beers we get. There’s your typical winter warmer style, spiced (but not too strongly) and malt-centric, then you’ve got the make it stronger school of thought that seems to drive some Belgian examples, and then you get the people who just do whatever the hell they want. There’s a place for all of these, I think, but what I associate with holiday beer tends to be the winter warmer style, spiced to perfection, with some hefty body to it.

Do have a holiday tradition with beer?

We’re about to cover one in more detail (an Anchor Christmas vertical of some sort), but the other is drinking Samichlaus on Christmas Eve whilst wrapping presents. Given the strength of Samichlaus, it’s a wonder the wrapping actually achieves its purpose of concealing the gift.

Are holiday beers released too early, or when should they be released?

As with Pumpkin beers showing up early, this is just something I can’t get worked up about. That being said, it seems like much less of an issue for Holiday beers.

I’ve sadly never been to one. I not really a huge fan of festivals in general, but a holiday beer festival sounds like it could be fun, given the right circumstances.

Alright, so we get to the main event, a vertical tasting of Anchor’s annual holiday beer, Our Special Ale. Every year, I buy a six pack of the stuff, drink some, and reserve the rest for just this sort of occasion. In the past few years, I’ve been tasting two or three vintages side by side, and it’s been fun seeing how they evolve from year to year. This is the first year I’ve managed to collect 5 different vintages, so I invited some folks over to do a little informal tasting and rating. 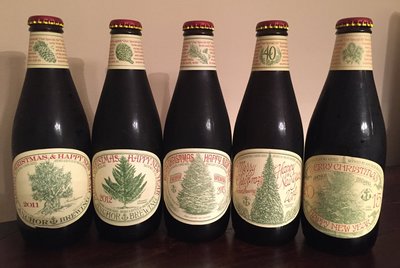 This was not a blind tasting, and we proceeded serially from 2011 up to 2015, each taking 3-4 ounce samples. Due to the social nature of the gathering, I did not take copious notes, but we did all rank the beers and I managed to jot down a few quick thoughts on each vintage. I also took a look back through my previous ratings to see if any patterns emerged.

We only had 3 people rating the beer (I had planned on 5, but two flaked out at the last minute), yet some patterns emerged. 2013 was unanimously the worst of the vertical (average score 1 out of 5, standard deviation of 0!), while 2014 was the clear winner of the night (average score of 4.67 out of 5). Two of us voted it as the best, and one voted it the second best. After a rough couple of years, 2012 rebounded into second place (average score 3.67 out of 5, though it did have the highest standard deviation), and 2011 and 2015 occupied the middle of the pack. For all you statistics nerds, you can check out the details on Google Sheets (I also included my ratings from the blog over time on the sheet).

After this, one of us poured the remainder of each bottle into some unlabeled cups, so the other two could do a blind tasting. One of us completely failed, and I actually got them all right. Go me. I will say, as the beer had warmed and carbonation had mellowed, vintages from 2011 to 2014 became much, much more similar. 2015’s unique character still stood out though, and I was pretty clear on 2013, but the rest felt like a toss up…

Finally, we poured all the remaining beer left into one glass. Cooooveeee! It smelled great, but by this point, there was no carbonation left. Also, there was only, like, an ounce or two of the blend. Still, this may be something worth trying more formally next year. Blending contest? I think that could be a lot of fun. Of course, my supplies of previous vintages are now dwindling. This was my last 2011, for instance. And I only have one 2012 left! Then again, 4-5 years does seem to be the ceiling on aging these beers. Spices fade over time, and while these are hearty beers, they don’t seem to take age as well as, say, a higher ABV, darker beer. It’s still a lot of fun, though, and while it’s generally what’s in the bottle that counts, I enjoy the romantic notions of associating these beers with Christmas, and the unique label artwork just puts me in the mood of the season. Have a great holiday season everyone, and may it be filled with tasty beer!

Update: It appears we’ve attracted the attention of Anchor’s VP of Production, one Scott Ungermann, who had a few comments:

First – you are correct – the beers don’t really age well past 3-4 years, so we recommend not laying them down much past that. Second – correct again – this year was a departure in that we felt less was more on the spice front, so we toned the spices down a bit as we upped the roasted malt to go darker & heavier… We agree that it will age nicely with this combo. Look for more of the same next year – maybe even a higher ABV & some more hops!

We are actually selling vertical 6-packs of ’12, ’13 & ’14 in our taproom store this year for the first time this year so that people can try them alongside our 2015 Special Ale for anyone who wants to try this at home.

The notion of going further afield and maybe even playing with higher ABV and moar hops is tantalizing indeed! Very much looking forward to doing another vertical in 2016!