Everyone loses their mind when a brewery sells out, but the business of brewing is one of those topics I just can’t seem to get too worked up about. That being said, I can get on board with the anxiety of a sell out if it’s one of your favorite breweries. There’s a natural worry that your favorite beer will be reformulated or go away completely because the new regime is unenlightened or something. So when I heard news of David Logsdon’s sell out of Logsdon Farmhouse Ales along with a simultaneous announcement that Brett Porter was leaving (one of the best brewer names ever, right up their with Wayne Wambles) I was a little worried. Seizoen Bretta is one of my favorite beers and a go-to way to blow less-beer-focused minds, Oak Aged Bretta is spectacular, and Peche ‘n Brett is delicious. I don’t want to lose these brews!

Fortunately, there are a few bright spots in this whole transaction. Firstly, this wasn’t a sellout to a giant multi-national conglomerate, but to another relatively small beer-focused local business. Second, Logsdon will still be involved: “I am not stepping away from Logsdon Farmhouse Ales. I am stepping away from the day to day operations of running this farmhouse brewery. I will still be overseeing the brewing and recipe development and quality control with no plans to remove myself from that.” Finally, this might even involve more availability, which would be a great thing for this beer. So it appears all my old favorites aren’t going away and will still be under the watchful eye of David Logsdon. That’s a relief! To celebrate, lets crack one of their specialties…

Far West Vlaming is a reference to the West-Flanders style of beer historically brewed by the Flemish people (a Germanic ethnic group who speak dutch, and to bring it all together, Flemish translates to Vlaming in Dutch). I’m not an expert on brewing this style, but there are some distinct practices here. It’s a mixed fermentation, meaning standard saccharomyces yeast in primary, followed by a wild secondary fermentation (Brett and souring bacterias) and a long stint in oak. The resulting juice is then blended with young beer to balance out the sourness. Logsdon’s take differs from most Flanders Reds that I’ve had in two ways: 1. It’s highly carbonated and effervescent (the style is usually lower to medium) and 2. It’s mostly a lactic sourness as opposed to an acetic sourness (i.e. no real vinegar type flavors here). Of course, there’s nothing wrong with either of those things, and the resulting beer is delicious, but it doesn’t really feel anything like other Flanders Reds that I’ve had… Let’s take a closer look: 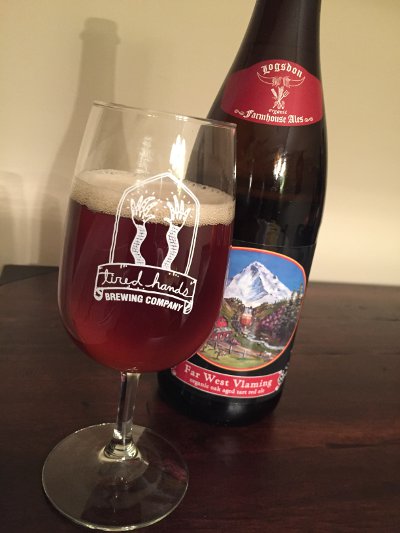 Logsdon Far West Vlaming – Pours a very pretty, deep orange amber color with a finger or two of fluffy white head that actually sticks around for a change. Smell has that characteristic Logsdon funk, musty with a little earth and lots of fruity esters. Hints of oak and vanilla as it warms. Taste starts off sweet, hits some vinous fruit notes, a little lactic tartness but not super sour, circling back to earthy funk in the finish. Again, as it warms, maybe a little oak comes out, but it’s not a big influence. Mouthfeel is highly carbonated and effervescent, medium bodied, only a hint of acidity kicking around. Overall, this ain’t no Flanders anything, but it’s pretty darned good in its own right and maybe you could just think of it as a different take on a classic style. A-

I usually try to have some Logsdon bottles around the house in case I get an opportunity to share, and it usually goes over like gangbusters. Well worth seeking out.