Every year, Almanac attempts to put their spin on the Pumpkin beer. This is my first, but they’ve done an Heirloom Pumpkin Barleywine and a Dark Pumpkin Sour, which both sound interesting, but they change it up every year. Perhaps someday, they’ll land on the perfect iteration, but for now, I’m enjoying their attempts. This is a spiced brown ale blend of beer aged in wine and Woodford Reserve bourbon barrels with hand-roasted California heirloom pumpkins and their house souring bugs. Not too shabby: 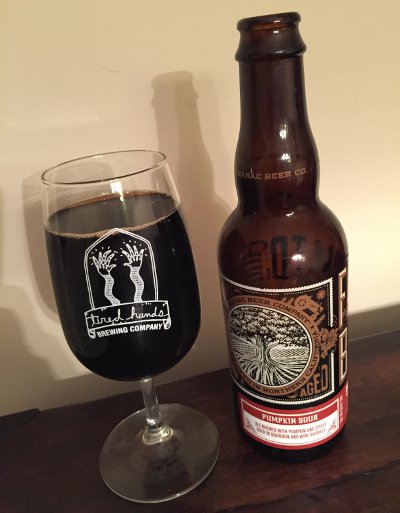 Almanac Pumpkin Sour – Pours a dark brown, almost black color with just a cap of fizzy, tan head that is not long for this world. Smells a little like a sour stout, some dark malts, some spices, and a slight sour twang. Taste starts off very sweet, some dark malts and spice, just a little in the way of oak, maybe a hint of bourbon, vinous fruit, and a nice puckering sourness towards the finish. Mouthfeel is a little light on the carbonation, but there’s plenty to keep it going, medium bodied, moderate acidity, hints of booze. Overall, this is an interesting beer, quite complex, though I’m not sure how much the pumpkin character sines through. The spices are there, but I’m not sure I’d identify this as pumpkin spice alone. Of course, this has no real bearing on anything, as the beer is pretty darn good. B+

As always, an interesting beer from Almanac, if not quite their best. I look forward to their next iteration on Pumpkin though. I’m sure I’ll managed another Farm to Barrel beer in the near future though, so stay tuned.