Collaborations always sound fun, but they can be tricky beasts. Sure, it’s always cool to see two brewers hang out and have some fun, but I’ve found the results to be a little hit or miss. Collaborations seem like opportunities to let loose and experiment, so it makes sense that such exercises don’t always yield gold. They’re rarely bad, but a lot of them just feel like they’re floating in a nether-region, not really representing either brewer’s character very well. Sometimes, though, you get something harmonious, more than the sum of its collaborators. Is this collaboration between the lager focused Jack’s Abby and the recently rejiggered hopheads at Otter Creek one of those harmonious combinations? It’s certainly one of the better collaborations I’ve had recently and these two brewers seem to retain their identity whilst still producing something new.

Label sez this is a “nouveau Pilsner” and it lives up to that name by incorporating a pretty traditional Pilsner lager (presumably Jack’s Abby at work) with two new German hops called Huell Melon and Mandarina Bavaria. It turns out that American “special” aroma hop mania has spread to traditional noble hop growers in Germany, who released these two daughters of Cascade hops in 2012. I’ve had Mandarina in a few things before, but I haven’t even heard of Huell Melon. Both are supposed to introduce citrusy characteristics to the more traditional German herbal hop profile. I didn’t realize this when tasting it below, and called these “bright European hops”, which I actually think fits pretty well. Let’s take a closer look: 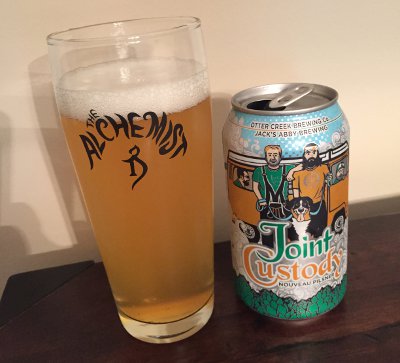 Jack’s Abby/Otter Creek Joint Custody – Pours a mostly clear pale yellow color with a finger of dense white head, great retention, and some lacing too. Smell features some grainy character along with what I’ll call bright European hops (meaning that it’s not like American or NZ/Australian citrus/pine bombs, but it’s got a citrusy vibe to it), citrus zest and some earthy, herbal notes. Taste has some biscuity character, those citrus and herbal hop notes from the nose come out here too, a little sweetness amply balanced out by earthy bittering hops in the dry finish (not like a heavy handed IPA; more balanced and clean). Mouthfeel is light, crisp, and clean, relatively dry, with a certain quenching feel to it. Overall, another nice take on the style, I might become a lager man yet. B+

Certainly a worthy collaboration, and both of these brewers are pretty good in my book. Look for more Jack’s Abby reviews in the nearish future…