I’ve been woefully neglectful of Alaska’s Anchorage Brewing on the blog for reasons unknown. It’s not like they don’t play in areas I find delicious, like oak aged beers dosed with Brett, and while they’re not ubiquitous, bottles do show up in the area with regularity. At some polite prodding on twitter, I decided to snag one of these Bitter Monks, a Belgian DIPA brewed with Apollo, Citra, and Simcoe hops and aged in chardonnay barrels with Brett.

I do love that artwork. It somehow manages to evoke a bunch of nerdy stuff from my childhood, like that episode of G.I. Joe (you know the one), or pouring through Dungeons & Dragons manuals, or that martial arts movie I saw on TV where they used flowing robes like weapons (ok, that doesn’t narrow it down, but still). As per usual, it’s not what’s on the bottle that counts, but what’s in the bottle, so let’s dive in: 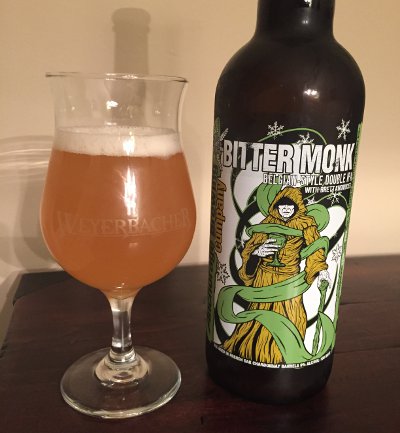 Anchorage Bitter Monk – Pours a hazy golden yellow color with a finger of fluffy white head. Smells amazing, lots of citrus, grapefruit, vinous fruit, and the like, some oak, plenty of musty, earthy funk, and maybe some spicy phenols kicking around. Taste is very spicy up front, with the funk kicking in at the middle along with some citrus hops, vinous fruit, and oak, followed by a tart note balanced by lots of hop bitterness in the finish. Mouthfeel is well carbonated, medium bodied, spicy, a little boozy too. Overall, a damn tasty wild ale. On the higher end of B+

These guys seem great at wild ales, but I’d love to try one of their non-wild barrel aged beers, like their barleywines or something. In the meantime, I’ll just have to suffer through these piddly world class Brett beers…