Inspired by a 2003 trip to New Zealand (the image on the label is a bay from the Nelson region of NZ) where the owner of Alpine stumbled upon NZ hops (then not used very much in the US) and decided to make a Kiwi inspired beer. The hop bill is comprised of all NZ hops with Nelson Sauvin being a specific focus, though others are clearly in use. 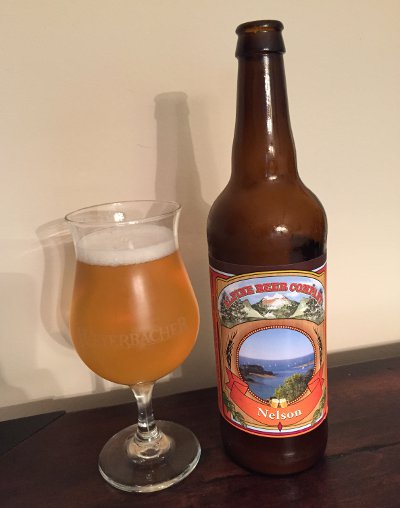 Alpine Nelson – Pours a clear, very pale, golden yellow color with a finger of white head that leaves lacing as I drink. Smells of citrusy, vinous fruit, grapefruit and the like, maybe something more floral and earthy lurking in the background. Taste has a beautiful grapefruit and vinous fruit character to it up front, followed by some rye spice in the middle, and a well balanced, light, dry bitterness in the finish. Great hop character without overpowering anything, and perhaps the first time I really get Nelson Sauvin. Mouthfeel is light bodied, well carbonated, and crisp, absolutely and dangerously quaffable. Overall, another spectacular IPA from Alpine. A

I also managed to score some Hoppy Birthday whilst out and about because Alpine distributes here now, and it was quite nice (I didn’t take notes because I’m the worst, but it was very light and quaffable, great hop character, though not quite as potent as Nelson or Duet). I’ll also be checking out some Captain Stout at some point in the near future as well, and who knows, if they keep distributing out here, I’ll almost certainly be drinking more of their goodness.