How do you do, dear reader? I am your most obedient servant and I am right heartily glad to see you. Forsooth, I have a most curious beer to discuss with you. Hailing from the honorable brewery known as Aleworks, situated close to the colonial town of Williamsburg, Virginia, this elixir began its life in a traditional brick wrapped brewhouse with open flame (as opposed to the modern heathens who useth more gentle steam systems), then slumbered for nearly 18 months in French oak barrels formerly used to age red wine. Truly a testament to the fleeting virtue of patience, that most humble of qualities. Hold ye onto thine britches, for these suds pack a sour punch: 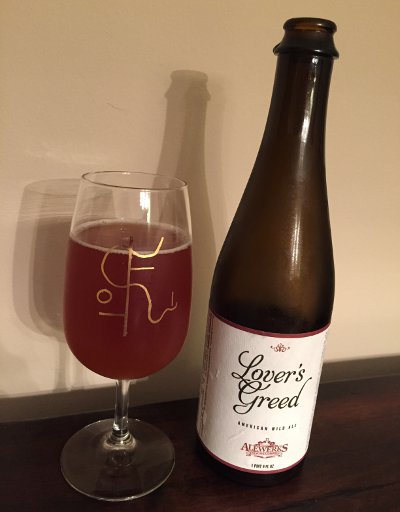 AleWerks Lover’s Greed – Pours a pale, hazy reddish orange color with a finger of fizzy head that quickly resolves into a cap of head that sticks around for a while. Smells of vinous fruit, sour cherries, and tart vinegar. Taste is surprisingly mellow, definitely lots of tart fruit, cherries and grapes, vinegar tones, a little in the way of oak and vanilla, sour but not overpoweringly so. Mouthfeel is light to medium bodied, well carbonated but smooth, slightly acidic but not a monster. Overall, a nice American wild ale; it’s quite approachable and goes down rather easy, comporting itself well in a crowded and competitive style. B+

Many thanks to Danur for the bottle! Also, I beg your pardon for my horrid attempts at colonial speech. It’s funny, AleWerks has even dropped Williamsburg from their name, so I’m guessing they’re trying to distance themselves from that connotation. Regardless, I’ve enjoyed most everything I’ve had from this small operation, and have been on the lookout for Bitter Valentine for a while now… There’s always next year.