Beer nerds can use acronyms with the best of them, though it’s often just used to abbreviate our conversations and confuse new money (but really, we’re just lazy and BCBCS is much easier to type than Bourbon County Brand Coffee Stout). But other beverages have their own complicated nomenclature, and tea has a pretty goofy one.

Last weekend, I drank two Single Estate Assam teas. This is a category I droned on about in some detail last year, so I’ll just note that it’s sort of like the Single Malt Scotch of the tea world (i.e. components of blends that are released on their own), and boy do they have a fun little system (for certain values of “fun”) to designate quality and grading. When you browse around for black tea, you’ll often see a little jumble of letters affixed at the end, such as “Halmari Estate GFOP” or, if you’re feeling more adventurous, “Oaklands Estate SFTGFOP1”.

Since this is a beer blog, I’m sure you’re all very excited for me to deconstruct all this tea stuff. Calm down, people! I got you covered (but seriously, beer blogging to resume in earnest later this week). The first thing to note is the “OP” designation, which stands for Orange Pekoe, which has nothing to do with fruit or whatever it is that Pekoe means in Chinese. It doesn’t even really represent a flavor or quality, but rather just the size of the leaves. When the leaves are processed, they result in varying sizes. They’re then sorted by size, and OP is the largest of the sizes. BOP (Broken Orange Pekoe) are smaller, and grades smaller than that are referred to as Fannings or Dust (those are mostly what you find in tea bags you get from the store).

GF stands for Golden Flowery and represents leaves harvested early in the season (usually with a golden color) and T stands for Tippy, meaning that the tea includes an abundance of tips (as opposed to buds). SF stands for Super Fine, which means exactly what you think it means. The tea nerd joke is that FTGFOP actually stands for “Far Too Good For Ordinary People” and extrapolating from that, the regular GFOP designation would mean “Good For Ordinary People”? Ah snobbery, hello my old friend/foe!

So, armed with this super duper useful knowledge of acronyms and tea nomenclature, let’s drink some tea: 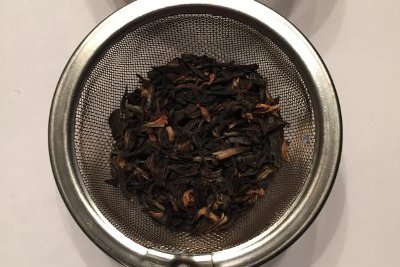 Single Estate Assam – Halmari Estate GFOP – Pretty standard looking black tea here, the leaves have some light colored tips included, and the liquor is a solid brown color. The aroma is more delicate than I’m used to from black teas, malty, nutty, perhaps even a little vegetal. Taste has a nice light malt character to it, nutty, with a bit of pungency towards the finish. Mouthfeel is full bodied and slightly pungent. Strong enough that it will take milk, but not overpowering at all. The description mentions winelike character, though I got approximately none of that, maybe a little fruit in the finish but I have to really look for it. Overall, it’s a solid cup of tea

Single Estate Assam – Oaklands Estate SFTGFOP1 – Very similar looking, both from the inclusion of light colored tips and from the deep brown color of the resulting liquor. Aroma is also similar, with that sort of delicate vegetal character that yields to more robust, malty aromas. The taste is definitely more robust as well, a very malty flavor with a pungent wallop. Mouthfeel is full bodied and pungent. Overall, what we have here is a more powerful cup of tea, perhaps not quite as complex as the Halmari, but nice in its own right…

Beer Nerd Details: We need to come up with a super complicated beer grading system. It would totally shut up the people who go on and on defining what “Craft” means, or at least make it all a moot point. Quality, rarity, ingredients, freshness, etc… could be used. On second thought, this would bring about the apocalypse as beer nerd fury would approach singularity levels and collapse in on itself. In other musings, perhaps the Halmari would be a good candidate (along with the Gunpowder Green from last week) for steeping along with a few hop pellets. I could probably swing that at some point, and I’d be curious how a more robust black tea would compare to the more subtle green tea in that respect (I’m guessing the green tea would be more appropriate, but who knows?) This has to be a thing already, right? I want to experiment with this a bit before I search around to see what other deviants are doing, but perhaps I could post something about this in the near future…

And we’re pretty much at the finish line now. Beer blogging will resume posthaste!