It was just a few weeks ago that I was jonesing for more local bourbon barrel aged beers, and as luck would have it, this hefty 10.5% ABV bourbon barrel porter from ShawneeCraft has been making the rounds in the Philly area. I thought ShawneeCraft’s Frambozenbier was quite nice, so I was really excited to check this one out. Alas, I think I got a bad bottle (and I’m not the only one) that had veered a little too far into infection land. Not a super nasty metallic beast that hurts or anything that bad, but enough to mute the typical barrel aged elements: 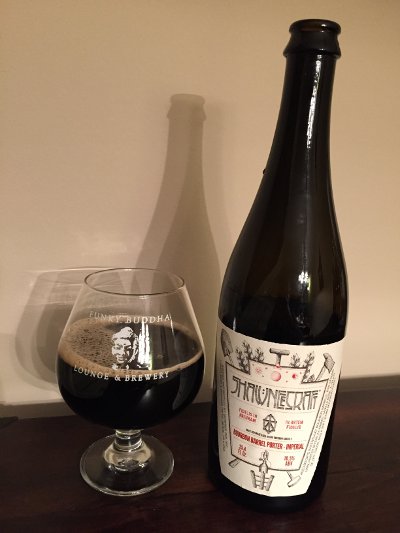 Shawneecraft Bourbon Barrel Porter – Pours a very dark brown color with a cap of quickly disappearing head. Smells of toasty malt, liquorice, a little vanilla and a hint of bourbon. The taste has and odd note too it, I think it’s what I called liquorice in the nose but that’s not quite right, it feels kinda fruity and maybe even harsh… Almost infected? It didn’t seem so blantant at first, but it’s getting worse as I go. This is not particularly pleasant, not as full bodied as it should be, with none of the richness from good barrel aging, and a too much acidity… Very disappointing. The base doesn’t come through very much, so it’s hard to get a good read on what an uninfected version would be like. I managed to get through a glass of the stuff, but couldn’t really handle the rest of the 750. D

A disappointing development from a beer I had high hopes for. In truth, infections happen to the best of them, so if this comes around again next year, I’ll probably give it another shot. And what the hey, I’ll probably be drinking more Frambozenbier too. Keep your chin up, ShawneeCraft!