A couple years ago, a friend invited a bunch of folks over for a barbecue and, naturally, beers were involved. Everyone was to bring cans of beer, and flush with a couple cases of Heady from the original Operation Cheddar, I naturally opted to share the wealth. Much beer was had, I ate some great pulled pork (courtesy of The Dogs of Beer), a French press and full leaf hops appeared, and merriment was had by all.

Believe it or not, the most memorable beer I had that day was Duckpin Pale Ale from a relatively small Baltimore brewery called Union Craft Brewing. Clocking in at a svelt 5.5% ABV, it was refreshing and quaffable in the extreme. Juicy citrus hops and tropical fruits all over the place, crisp and refreshing (perfect for the backyard barbecue setting). It was a great beer and would be a total go-to if I was closer to Maryland (even as it is, I try to keep my eyes open whenever I’m there). Tickers on certain sites have no idea what they’re talking about (not that it’s rated badly, per say, but still). So when news hit that they were releasing Double Duckpin, an amped up DIPA version of Duckpin, I was immediately on board. Thanks to the diligence of a friend, I snagged a can and the rest is history (thanks Danur!) The fantastic semi-local DIPA game has been getting pretty crowded of late, but that’s a good problem to have, right? So let’s set up our Double Duckpins (which, come to think of it, would probably just be regular bowling pins, would they not?) and go ten frames: 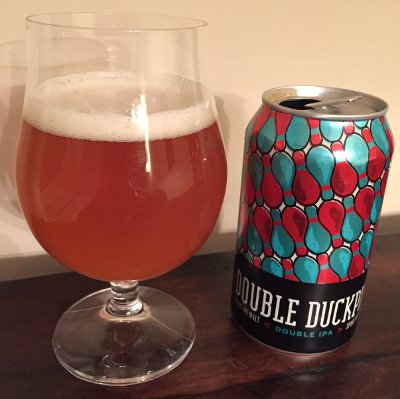 Between this, 077XX, and The Shape of Hops to Come (not to mention old hats like Victory and the one-off masters at Tired Hands) we’re in pretty good shape with the DIPAs over here. Between Tired Hands and Forest & Main, we’re hitting the saisons and sours pretty hard too. Now we just need to step up our bourbon barrel stout/barleywine game, and we’ll really be rolling in it.