For a state with as many breweries as Pennsylvania, it’s surprising how few barrel aged stouts are out there. We’ve been killing it lately with barrel aged sours, but stouts and barleywines and the like seem to be much less common. Not completely absent, of course, but when it comes to massive face melting awesomeness, we’re coming up a little short. The only examples that are coming to mind are highly limited one-offs like Pappy Black Magick or Whiskey Barrel Aged (not technically a stout, but close enough). Victory had a good thing going with Dark Intrigue, but they also claim they will never make it again. There are other one offs on their way (and I have another one right over here that I’ll get to soon enough), but very few regularly produced local bourbon barrel aged beers.

Which is to say that when Sly Fox announced a Barrel Aged version of their Nihilist stout, I was totally on board. I enjoyed the base beer well enough, so I had really high hopes for this version, aged in Bourbon barrels. Alas, it’s not quite the savior I was hoping for: 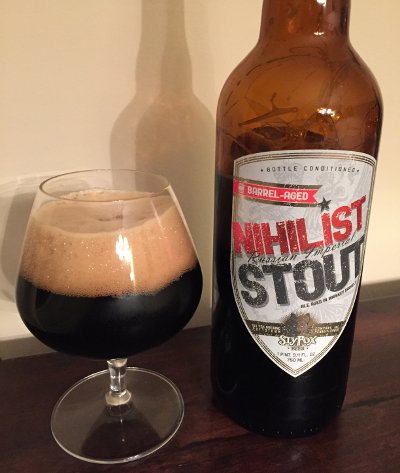 Sly Fox Barrel Aged Nihilist – Pours a very dark brown color with massive amounts of fluffy, tan head (I did not pour this like an asshole, it’s just saisonlike in its head generating capabilities). The head sticks around for quite a while and leaves almost a full sheath of lacing as I drink. The smell is of muted roasted malts, a little bit of whisky, not a ton of oak (though it’s there). Taste is very malt forward, that roast is still quite prominent up front, with a little richness from the oak and vanilla in the middle, and a strong hop bitterness coming on in the finish. Mouthfeel is overly carbonated, which makes it seem less rich and full bodied than it probably would be without quite so much carbonation. It also has a little too much dryness for a barrel aged stout. I’m very picky about my carbonation, and usually when it comes to BA stouts, that translates as undercarbonated. This is perhaps the first time I can think of the reverse being true, but it really does hinder the enjoyment of this beer. This is not to say it’s bad, just that I would have preferred less carbonation in this, and I think it would do wonders for the beer overall. B

I actually have another one of these that I guess I’m just going to lay down in the cellar and see what happens after a year or two. Mayhap that carbonation will calm itself down or something…