Well, let’s hope this goes better than the last time I tried a beer from Avery’s Barrel-Aged Series. Black Tot sounded good in theory, but wound up infected. Such are the perils of barrel aging. This one shows promise, if you can call not being infected promise. Which I think I can, so I will. You’re not the boss of me!

So anyway, they’re calling this a Belgian Style Quintupel ale, which is like 5 times better than regular beer. It’s kind of a joke, but then this does clock in at a hefty 19.39% ABV which, yes, looks to have nudged out Black Tuesday as the strongest beer I’ve ever had. Fortunately, this time around, we’ve got a simple 12 ounce bottle, so it appears that Avery isn’t trying to completely annihilate me. The ultra-high ABV game gets tiresome pretty quickly, but sometimes it can work. Is that the case here? Only one way to find out: 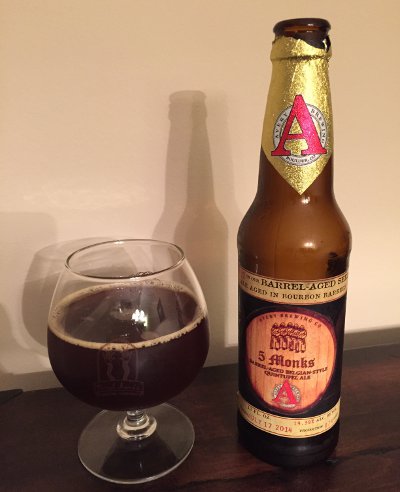 Avery 5 Monks – Pours a turbid, muddy brown color with half a finger of tan head that fizzes down to a ring around the edge of the glass pretty quickly. Smells of dark fruits, molasses, and boozy bourbon. The taste hits pretty hard with that molasses character, with some really rich caramel and brown sugar, maybe even a hint of dark chocolate, less in the way of dark fruit than the nose would imply, though maybe some of it peeks through. Tons of booze, bourbon, and a little of the rich sugary oak and vanilla character from the barrels. It’s sweet, but never approaches cloying levels. Mouthfeel is rich, chewy, thick, and full bodied, a real monster. Lots of alcohol heat, it doesn’t quite burn on the way down, but you’ll get a warming feeling in your belly pretty quickly. Despite this prominent alcohol character, it’s not as overwhelming as you might expect – there’s enough other stuff going on that it all works. Very well carbonated and a surprising lack of stickiness make it more approachable than you might think. Overall, this is intense and complex, a boozy monster that has no real pretensions of balance, but works nonetheless. Kinda reminiscent of a boozier version of The Bruery’s anniversary beers, with more molasses than fruit. It’s probably the sort of thing that should be shared 3 ways from a 12 ounce bottle like this, but it made for an excellent sipping beer, something that works over long periods of time. I like. A-

So yes, I will most certainly be seeking out more Barrel Aged Avery. I actually have a bottle of something I’ve been aging for a while that might be worth pulling out now, so keep your eyes peeled. I’m sure we’ll get to it soon enough.