There’s a huge amount of amazing sour ale out there for the taking these days, which I think belies the difficulty of brewing sour beers. Wild yeasts and bacterial beasties can do unpredictable things, and sometimes those things don’t happen until the beer’s been in the bottle for a while. Is that what happened here? Is this a bad bottle situation? I got a distinct, but not very powerful smokey funk note (along the lines the recent Smoketôme epidemic, though perhaps not as overpowering). This can work in some beers, but the mixture of smoke with a fruited sour struck me as odd, even if the rest of the beer was rather spectacular… I guess they can’t all be winners. I will most certainly be on the lookout for new and exciting Cascade beer, and if Blueberry makes another appearance next year, I’ll give it a shot. In the meantime, lets take a closer look at this one: 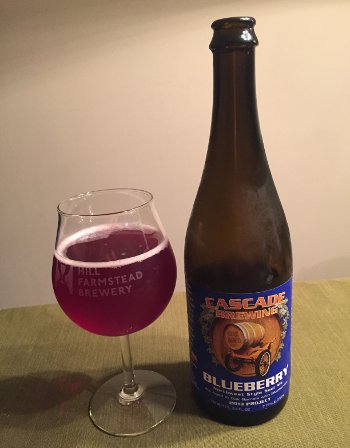 Cascade Blueberry Ale – Pours a very striking rose color with a finger of fizzy pink head. Smells of musky funk, tons of fruit, that sour twang, and plenty of oak. The taste has a nice sweetness to it, huge amounts of funk, moreso than usual with Cascade, a little tart fruit and general sourness before that funk comes back strong, with an almost smokey character to it. Not overpowering like the recent Fantomes and the rest of the beer is fine, but it’s definitely there, and I’m not sure it works. Mouthfeel is well carbonated, crisp, and a little acidic. Overall, this is good, but that slight smokey character is disappointing. Without that aspect, I could see this as being spectacular. B-

This was a bit disappointing, as I was expecting something more along the lines of the Kriek or even Apricot entries. Still, as I mentioned above, I will always be on the lookout for some of the more interesting Cascade offerings, even if I don’t really have a line on anything new at this point…